Eliot's movie review of Guardians of the Galaxy Vol. 1

This was probably one of my favourite films ever! This is because superhero action films are better when comedy is merged with it. Star-Lord (played by Chris Pratt) is not one of those dark, gritty, broody heroes like Batman. Instead, he was funny, a little immature and cheerful, the opposite of Batman’s personality.

Drax (played by Dave Bautista) is another interesting character because although his wife and child were murdered by Ronan the Accuser (who’s the villain), he is a funny character.

The special effects were amazing! It was clever how they made two life-like characters, Groot and Rocket Racoon, using special effects. Stan Lee, the creator of most of the Marvel Comics characters (and one of my favourite comic book writers), also had a cameo in it. He had cameos in almost every Marvel film until his death.

There are loads of differences when you compare the film with the comics In the film, there was this place called ‘Knowhere’, which is a gigantic skull place and used for one of many black markets in the universe. In the comics, however, it is the Guardians’ base. I think changes like this make it easier for people who haven’t read the comics because it helps the viewers keep seeing the characters as fun and good people, rather than having a base like a skull, which is perfect for a villain.

The only thing I didn’t like was the fact that Groot had a tiny vocabulary because in the comics, he has a massive vocabulary.

I would give this film 9/10 and I enjoyed it so much I’ve already watched the sequel. I can’t wait until the third part comes out next year!

Header Image Credit: A photo taken from the DVD jacket. 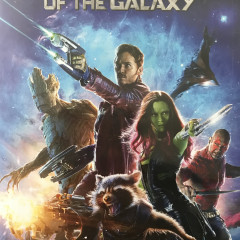 FILM REVIEW Guardians of the Galaxy 1

Eliot's movie review of Guardians of the Galaxy Vol. 1