Voice MagReviews‘We Got It Easy’ rev…

‘We Got It Easy’ is a short musical film about the daily struggles of young people in Britain.

Watch 'We Got It Easy' here.

‘We Got It Easy’ opens with a shot of a bright morning in a British town, and follows the stories of several young people struggling with various issues, such as gender identity and sexism. This short New Creatives film created by Jess Bartlett and Elise Martin seemed to  really capture the realism of British school life, down to the gossip in the changing room and the uniforms. I liked the range of issues this piece covered, and especially how many of the stories focused on sexism and gender discrimination. For a lot of people in school like myself, this is a reality, whether this is inside or outside of school.

This short film had no dialogue, instead choosing to communicate through singing. Personally, I think this mostly worked well through the piece, although there were a couple of sections where it wasn’t as successful. The duet parts and the crescendo of voices towards the end really compounded the message of the film, and was complemented by great acting.

I loved the theme of previous generations not understanding problems of the current generation, and I wish that had been brought into the entirety of the piece. The recurring phrase ‘we got it easy’ only really made sense to me at the end of the film, as I assumed it was talking about their own problems. Only at the end did I realise the phrase was being used to belittle young people’s problems, and was talking about ‘we’ as the current generation.

I enjoyed watching this short film and look forward to watching more artwork from my generation’s perspective!

We also interviewed creators Jess Bartlett and Elise Martin, and you can read that interview here. 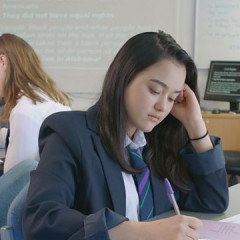 ‘We Got It Easy’ review

‘We Got It Easy’ is a short musical film about the daily struggles of young people in Britain.