Pinocchio Gets Wood is an adult pantomime produced by the Guilford Fringe Theatre Company that premiered on YouTube. It's Pinocchio like you've never seen him before and like you thought you never would. I don't know about wood, but Pinocchio certainly got...weird.

‘Pinocchio Gets Wood’ is an adult pantomime, put on by the Guildford Fringe Theatre Company that streamed on 10 September live on YouTube. Since Covid-19 shut down all the theatres, many creatives have had to find new ways to interact and entertain audiences. For some, it has been an easy transition, but for pantomimes, I’m not sure that an act that relies on audience participation can survive this way – or at least, Pinocchio Gets Wood can’t.

Part of the “fun” of pantomimes is ‘oohing’ and ‘awwing’ in all the right places, followed by an outcry of ‘he’s behind you’, loud enough for everyone to hear except for the person it’s directed at it seems. I never imagined what a pantomime without that would look like – now I know, and my complaint about pantomimes is the one thing I found myself missing.

The lack of audience presence wasn’t the only challenge the pantomime faced. The storyline didn’t make much sense, and the presence of William Shakespeare’s Juliet was frankly just confusing.

What I don’t understand is, if wood in this instance is reminiscent of the male phallic organ, why wasn’t it called Juliet Gets Wood? Why was Juliet there in the first place? The only thing Romeo & Juliet and Pinocchio have in common is that they were both set in Italy, which seems like a rather loose premise to base an hour-long panto on.

If I was to set all that aside and accept the fact that the show was just a bit of fun, herein lies my next problem: the show wasn’t funny. The humour was slapstick and cheap; it reminded me of a less humorous version of the ‘Carry-On’ movies from the ’60s. They were outdated and very hard to swallow – no pun intended – and frankly uncomfortable to watch.

All that being said, it can’t be easy to perform without an audience, especially when your entire act depends on it. And for that, I must commend the cast. They carried on as if the house was packed with a 1000 dirty-minded fans singing along to their oversexed covers of pop music like ‘All About That Bass’ and Grease’s closing anthem ‘You’re The One That I Want’. To top it off, they only had a cast of four which isn’t easy to pull off, even when you have the biggest of budgets – which Pinocchio Gets Wood did not. The cast must be commended on the workarounds they introduced to overcome these obstacles, for example, Jiminy Cricket was a green laser beam.

The genuine chemistry that existed between the cast members was one of the only things that held the show together. They bounced off each other and covered for one another when the occasional slip up of the lines occurred that if I wasn’t reviewing them, I’m not sure I would have even noticed.

As one of pantomimes least dedicated cheerleaders, I may very well have missed the mark. Other audience members had no problem showering the cast in compliments in the comment section – I just couldn’t quite get there. I could see what they were trying to accomplish, but perhaps a few more rehearsals and a second pair of eyes on the script would have been useful. If it weren’t for them dancing around in face shields at the end of the production, or the occasional COVID gag or Trump impression, I would not have been able to tell that Pinocchio Gets Wood was even made in this decade. 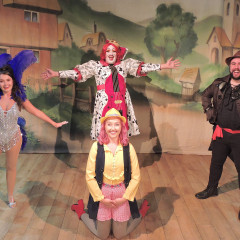 Pinocchio Gets Wood is an adult pantomime produced by the Guilford Fringe Theatre Company that premiered on YouTube. It's Pinocchio like you've never seen him before and like you thought you never would. I don't know about wood, but Pinocchio certainly got...weird.