‘What Will They Say About Us’ is an exploration into the darker side of humanity, with James positioning himself as a saddened and bewildered observer of the wrongs of the world. Police brutality, homophobia, family disputes and the integrity of the music industry - nothing is off limits here when it comes to what Billett will sing about, tackling each subject with sensitivity and maturity (think of it as the spiritual and musical descendant of John Mayer’s ‘Waiting on the World to Change’).

Undisputed EP standout was the first track released, ‘Faith Over Family’. The poetic nature with which Billett explores the idea of religion versus family when it comes to homophobia is heart wrenchingly beautiful, intricate and delicate. Both an ode to happiness felt upon discovering sexuality, and the despair when those closest to you don’t understand, the song is a bittersweet moment on the EP, and clearly displays Billett’s unparalleled talents as a storyteller.

In the past, Billett had already begun establishing a music career for himself. He was signed to a major record label and gathered momentum and interest, before deciding that it wasn’t right. Walking away from a path to stardom so perfectly laid out for him would not have been an easy decision to make. “I started to hate the idea of becoming famous if all it meant was wearing the right things and singing songs you didn’t like,” says Billett. Having felt stifled creatively and trapped during his time on the label, James Billett was then free to write his own songs, not only about love and heartbreak, but about more political topics such as the #MeToo movement, police brutality and gay rights.

‘What Will They Say About Us’ is a triumph, the first step in a long career from a man who refuses to back down and will fight for the rights of others on his own terms, for as long as it takes.

The 'What Will They Say About Us' EP is released everywhere on the 25th September 2020. 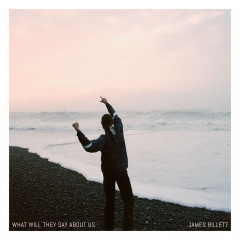