Speaking up on personal issues such as her own health, gratitude and empowerment in the wake of a life-changing diagnosis (Sage was diagnosed with cancer and wrote this album whilst receiving treatment and recovering).

“I inevitably wrote about the challenges, but also the silver-linings (gratitude, mindfulness, renewed faith and appreciation of family and friends), of my cancer experience,” says Sage. Lead single from Character, ‘Bravery’s On Fire’, was a heartfelt exploration of what it meant to face the odds, with Sage previously describing it as “the most humbling mountain I’ve ever had to climb.”

Finding the courage to admit one’s own vulnerability is a theme throughout the album as a whole, as Sage is seen constantly opening up and baring her soul, no holds barred, for us to listen to. She does it in such a confident and matter-of-fact way that she sets a precedent, not only for performers who move in similar circles in the music industry, not only for patients and survivors of various mental and physical illnesses, but for anyone and everyone who has been asked to find strength they didn’t know they had in the face of adversity.

On September 24, Sage will be hosting a global virtual fundraising event, “Bravery On Fire: A Benefit for Cancer Awareness”. It will feature a wide array of talented musicians and actors – including Paula Cole, Jill Sobule, Megan Hilty, Kyshona, Heather Mae & Crys Matthews, and Alison Pill – coming together to help raise awareness around prevention, early diagnosis and research for Women’s Cancers. The broadcast will stream from www.braveryonfire.com as well as Facebook and Youtube; 100% of proceeds will go to Foundation for Women’s Cancer.  Please visit www.braveryonfire.com for more info! 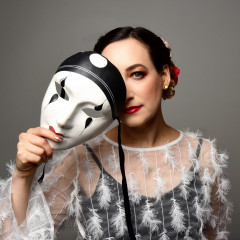