Noise is a punchy little black-and-white New Creatives film with a vivid soundtrack about taking time away from always-on screens and endless news-feeds.

Noise is a black-and-white animated short film directed by David Torre about a person called “Gary” desperate to free himself from an endless onslaught of media content.

As far as communicating its key message is concerned, Noise is pretty flawless. We start out with the simple imagery of Gary in his room alone with his devices, desperately trying to turn them off as they continue to play visual and aural noise at him. Then, as the piece becomes more abstract we have the image of the phones manipulating human brains in various forms. One phone holds a brain in its hand, communicating a strong sense of control over the psyche. Several others make thrusting gestures, indicating a penetrative, even sexual, effect on the brain. Others are in a big ordered room, banging on brains with sticks like a corps of drummers, giving off something of a Big-Brother or even militaristic control over their brains, maybe even as if conditioning them to follow a particular narrative, “bang the party drum” if you like. The film ends with Gary at peace amongst nature, having escaped his technologically mediated and controlled world. The piece ends on something of a laugh as he breaks the 4th wall at the viewer, before knocking the camera over as his final act of escaping his media-filled world.

The music by Timothy Crombie successfully creates a tech-dominated soundscape, beginning with ominous technological sounds, beeps, whistles, synths, and – of course – white noise. As Gary enters his power fantasy, turning off the tech in the surreal world, the music kicks in with a rhythmic and synth-heavy beat, swelling and dropping back in intensity in sync with the action. The final scene has the music cut to allow through birdsong and nature sounds, but lust creeps back in for a final hit as Gary dispatches the camera. It perfectly fits the action and the aesthetic of the film.

Speaking of: the visuals for this film are simultaneously its greatest strength and also probably its weakest element. The art style is cool and by using patterns manages to give a sense of shading and texture to the environments; difficult to achieve with only two colours. If I was being really picky I would point out some technical oversights, like the misalignment on the floor pattern in the bedroom, or how the thickness of the text on one of the models seems to change between shots, but none of this is immersion-breaking so it really only makes for minor points.

The modelling by Paris Bannerman is largely convincing, giving a real sense of scale to the scenes; a difficult achievement, especially in the more surreal sections. The surreal section’s use of the Penrose triangle, shaded with the same effect as the screens of the phones to indicate infinitely running through a never-ending stream of media was a nice bit of imagery.

Noise’s biggest shortcoming I would have to say is the animation. The main character suffers from that all-too-common effect in animation where the model seems to be sliding along rails whilst their legs just sort of flail underneath them. There are also issues where the character’s movements seem a little robotic and inorganic. That surreal section with the character running along 3D shapes also includes some clunky animation which is a little jarring.

The cinematography is mostly well done, with the framing and Ken Burns-style zoom effects working well for both the pacing of the piece, highlighting the moments of action, and generally forming good shot composition. It might have required a little more trimming in post-production however, as there are moments - especially in the bedroom scene - where there feel like there are pauses before the action continues, which could have been avoided with a little more judicious cutting.

Overall Noise is an effective bit of commentary on our sometimes obsessive, even abusive, relationship with technology and media. Whilst there are some technical problems, the well-conceived art-style, fast tempo, and creative musical score make up for much of its flaws in animation execution.

It is a piece that asks us to take a break from the never-ending, never-sleeping screens, and asks us to consider just taking a break from it all and appreciating the natural world for a moment. Which I might just do myself and go for a walk after this. Although… maybe I’ll just check the Voice Instagram first…

We also interviewed David Torre for the Voice Magazine podcast, and you can hear that conversation here. 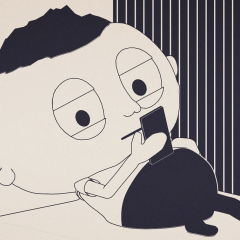 Noise is a punchy little black-and-white New Creatives film with a vivid soundtrack about taking time away from always-on screens and endless news-feeds. 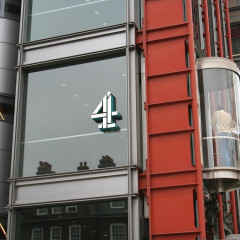