This is my review of Star Wars: The Force Awakens for my Bronze Arts Award.

Star Wars: The Force Awakens is the seventh film in the Star Wars franchise, and the first one made since Walt Disney acquired LucasFilm in 2012.

‘Star Wars: The Force Awakens' is a space adventure, fantasy movie. That tells the continuing story of characters in the Star Wars universe. I think this is a brilliant movie. I am a huge fan of the original films and this one did not disappoint me.

The storyline was very similar to that of Episode 4 but it was still brilliant and engaging with enough different scenes to add something new. A mix of impressie set pieces, action and character driven scenes mean you really care about the characters. The film combines old characters from the original trilogy  with new characters, and this worked well as the action was evenly split between the two groups. You get a chance to see every character involved in the action and in making personal relationships. There were enough references to the old films to make it feel like a continuation, whilst still showing something new.

My favourite new character was BB8, who is an astromech droid. I thought that he brought an element of comedy to the film that was brilliant.

The film starts slowly but the action quickly gains pace, and there are numerous brilliant lines that make you laugh, such as “I’ve got a bad feeling about this” by Han Solo. (Harrison Ford)

Some of the space battle scenes are amazing, the best I’ve ever seen, and the CGI was brilliant, none of the characters or ships looked fake. My favourite CGI scenes include those on Ilum, the Star Killer base, because the set was impressive, scary and the visual effects were amazing. You really felt like you were inside the base with Rey, Finn, Han Solo and Chewie.

The film was directed and co-written by J.J Abrams, who is famous for having directed other action adventure films such as Armageddon, Mission Impossible III and Star Trek: Into Darkness. His ability to craft space battles made him a great choice for this movie. 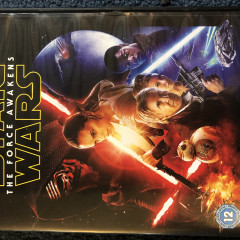 This is my review of Star Wars: The Force Awakens for my Bronze Arts Award.