Three individuals shrouded in mystery, yet they are making their presence known – no I am not talking about The Three Bears – I am talking about new pop-rock band Aliensdontringdoorbells who have landed with their new single ‘Story’.

Telling the tale of a youth in the sun with his parents, ‘Story’ is a mix of happiness and sadness as the days of sun seem to become that little bit colder when a significant human loss adds a another dimension to the track.

The lead vocal sounds like a Gary Barlow solo effort, but it is important to note that it is produced in such a way that it clearly resonates as Aliensdontringdoorbells, manifesting the material they want to create.

To summarise, the well-written thoughtful lyrics add real charm to this debut release and showcases a real ability for writing about the human condition. Make space on your summer playlists for ‘Story’ now! 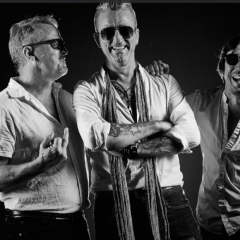