I chose the Super Mario Bros Movie for my arts award review.  I chose it because I like Nintendo and Mario and apparently the movie wasn’t very good so I wanted to give my thoughts on it.

The film was made and set in 1993, and loosely based on the Mario franchise.  The Super Mario Bros movies is about Mario and Luigi trying to save Princess Daisy from Koopa (Bowser).  It was set in Brooklyn in New York, and in a parallel sub-universe.  The parallel universe was created when the meteor hit the earth and wiped out the dinosaurs.   The film starts with a woman delivering an egg to a orphanage.  When the egg opened there was a baby inside. This was 20 years before the film takes place.

In present day, Mario and Luigi are plumbers but they can’t get any work and another plumber keeps beating them to jobs.   Luigi bumps into daisy whilst using a payphone.  Daisy is an archaeologist. She is trying is trying to get security for an archaeological dig on a building site where they have found dinosaur bones.  Two henchmen had been sent from the parallel universe to kidnap Daisy.  Luigi and Mario are in the sewers to fix a flood and they follow her and try to rescue her.

Special effects: The special effects were very good for its time.  Although Yoshi did not look like you would expect, they did do a very good job on the CGI for him and he looked like a dinosaur from Jurassic Park.   Bowser, later in the film, sticks out his reptile tongue and it was very realistic.

Acting and casting: Bob Hoskins played Mario well – he did look like Mario and was good at playing the part, but, if you hadn’t told me that  John Leguizamo played Luigi, I probably wouldn’t have guessed.  He didn’t really have any of Luigi’s characteristics or mannerisms.  In the same way, Koopa did not look anything like Bowser – he was more like Donald Trump.

Plot: I did like that they plot was not completely taken from Mario but I think that its wasn’t very well executed because in some parts the movie felt a bit boring and sometimes you couldn’t tell what was going on.

True to the Mario franchise?:

The films biggest problem is that if you hadn’t told me that it was a Mario movie, or given characters names from Mario, then I wouldn’t have been able to tell it was supposed to be a Mario movie.

Characters from the game appeared in the film but were not true to the game and were not memorable.

Mario and Luigi didn’t dress like they did in the game until the second half of the film when they finally dressed in their red and green outfits, but there was no real explanation why they changed.   The costumes throughout the film were very dated and women were dressed inappropriately in some scenes – for example in the dance scene, there was a lady dancing in a bikini, and there were lots of shots of ladies chest areas.

The only use of ‘Mario music’ was in the introduction to the film.  The rest of the music was music quite boring and repetitive and I didn’t like how it cut in and out of random songs.

The ending to film (without giving spoilers) was a fight between good (Mario) and evil (Bowser) – but it felt more like cartoony that anything, giving me a feel of roadrunner and Wile E. Coyote.  It was underwhelming.  It didn’t feel like the baddy could win.

If I had gone to the cinema to see this, I would have thought it was a bit of a cash-in.  I think that if they hadn’t tried to make this a Mario movie and the story was better executed it could have been a half decent film.   I think that trying to make things work with the Mario franchise almost made it worse because you were always disappointed that it wasn’t good enough.

Although the movie was better than people said it was, it wasn’t much better that that.  It felt underwhelming and not deserving of being a Mario movie.   I would give it 3.5 out of 10.  It wasn’t a great film.

The next time Nintendo did a film (Detective Pikachu) it was a lot better and definitely worth watching, but this is not worth your time. 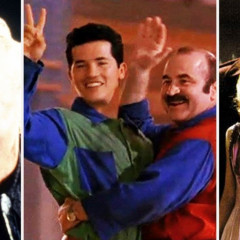 I chose the Super Mario Bros Movie for my arts award review.  I chose it because I like Nintendo and Mario and apparently the movie wasn’t very good so I wanted to give my thoughts on it.