Reflecting on things left unsaid, this New Creative film by writer/director Rachael Walsh opens with a shot of Kat (Eleanor Chaganis) sitting beside a fire, speaking into a walkie-talkie. She is soon joined by the person on the other end of the walkie-talkie, best friend Libby (Hannah Walker) as the two joke and reminisce.

The initial small talk between the two characters feels slightly awkward, but once the discussion moves on and the story progresses, the connection between them seems more genuine and less stilted.

I really loved the lighting setup of White Dwarf. Using just the fire (and occasional torchlight), the faces of our two protagonists are softly illuminated, and further emphasises the sense of intimacy. This scene setting is also enhanced by the crackling of burning wood that gently underpins the dialogue.

White Dwarf is short, at just over three minutes long, so the transition from cracking jokes and messing around to the more serious demeanour was quick. However, I think that rapid change played in the film's favour, delivering an emotional punch that was unexpected, and offered a beautifully heartbreaking ending to a brief, meaningful film.

Check out our New Creatives coverage in the New Creatives Voicebox, and read our interview with writer/director Rachael Walsh here. 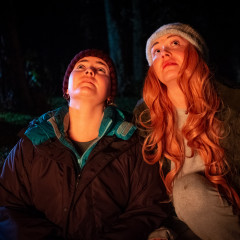