Sally Cookson’s play Jane Eyre, is a musical drama about a young girl called Jane who lost her parents when she was only a baby and they leave her with her Aunt. It has a powerful motive of a child driven by finding love and independence. It shows issues of love and hate which teaches you what love and hate does to you and how it can change you.
The set for the play is almost like a building site it has wooden planks raised in some areas with ladders all around the band are on stage which helps the actors connect with the music. There are white curtains around the stage with the audience in a proscenium arch. Some very inventive ideas where used such as: there was a trap door that was continually used throughout the play which showed someone dying like going to hell ; also lanterns were used by the actors to make it look like Jane was walking down corridor.
The costume was what told you that the play was set in the olden days as thee girls wore long thick skirts and the men wore waistcoats and top hats. The costume was well designed as you could tell which one Jane was throughout the entire play as she wore very baggy clothes and white or light grey but also the costume changing onstage was really effective as you could clearly see you was growing up and becoming older. Near the start of the play Mrs Reed (Jane’s Aunt) was holding rags which represented baby Jane then Mrs Reed flung it out and showed a scene change and the rags became a dress for Jane. The colour of the cast costume made the stage eerie as everyone was wearing dark and neutral clothing. This made the performance very gloomy and the story would not have had much of an effect on the audience if the costume wasn’t dark.
The lighting for the production was done extremely well. The white curtains made the lighting really effective as it could change the whole stage into one colour and make the curtains like that. The lighting on the white curtains showed what time of day it is really well and showed the audience that time was passing. The lighting created a ghostly mood as most of the time it was a grey colour or white which made it very spooky. There were a few key lighting effects in the production such as: the thunder storm and the death of Jane’s Uncle. The lighting also helped the transition of scene changes by going from one colour and snapping into the next.
The music in the play was used throughout the performance it was used to create a atmosphere and to set the scene and also to create tension. The music changed throughout the play going from soft and sad at the start then changing to quite upbeat folk to soft and gentle folk. When Jane was at school the music was extremely tense and you didn’t know what was going to happen. On a whole I thought the music worked extremely well with play.
Madeleine Worrall made a brilliant Jane Eyre she played the role extremely well and she nailed the sad parts where she had to cry. I also thought Simone Saunders did an extremely good job playing lots of different roles and changing accents constantly she played Bessie/Blanche Ingram/Diana Rivers.
Overall this was a very well performed play and I would recommend it to a lot of people. 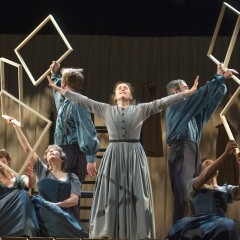