Voice MagArts AwardReviewsLady and The Tramp (…

The Lady and The Tramp (2019) was written by Andrew Bujalski and Kari Granlund, directed by Charlie Bean and produced by Brigham Taylor. It follows two dogs through the streets of America in the early 20th century.

The Lady and The Tramp (2019) was written by Andrew Bujalski and Kari Granlund, directed by Charlie Bean and produced by Brigham Taylor. It follows two dogs through the streets of America in the early 20th century and shows the viewers that there’s more to life beyond their front door.

The story follows the life of a dog called Lady who has always lived with her owners, until she gets kicked out after being warned by a street mutt, “When the baby moves in, the dog moves out.” She is forced to live with him on the streets for a while, but then things get out of hand when the dog catcher arrives. The story, is very similar to the original 1955 movie, other than the fact that the majority of songs and musical numbers have been removed from this remake, including The Siamese Cat Song.

Tessa Thompson voices Lady in the film and brings out the elegant and sophisticated nature of Lady’s character. She made it very believable, making the audience truly think that they were watching a real dog, talking about all of the remarkable things that she does. She also makes the bond between lady and her owners, Darling and Jim Dear (Played by Keirsey Clemons and Thomas Mann), look very clear and emotional in most parts of the movie (due to the fact that they are separated for some parts).

Justin Theroux voiced The Tramp in the film and shows the lovable nature of this street dog, which sadly for him, the dog catcher (played by Adrian Martinez) sees right through and is determined to catch him throughout the film. His rough, deep voice portrays him as the street dog that he has had to learn to be. His chemistry with Lady (Tessa Thompson) is also very dynamic and it also helps to show the audience that you need to look past what you see.

The set makes you believe that you are in the early 20th century because of the design of the roads and houses. The real dogs that are in this movie were also extremely talented, along with the dog trainers, because the only special effects that they used was to make their mouths move when they were talking. The cats, however, were special effects because they had to do a lot of things that you certainly could not train a cat to do but this did not have a negative effect on the film. The costumes were very effective but a little bit out of the time period for when it was set. It was a little bit disappointing, because most of the original songs were removed from the film for various reasons, for example, The Siamese Cat song was removed to avoid racism.

Most audiences really enjoyed this film and will not forget it once they have seen it. My own opinion of the film is that it is an amazing remake of the original film, but I think it would improve it if at least some more of the original songs were added in. Overall, this is a great family film, which is suitable for all ages and I would recommend it to anyone. 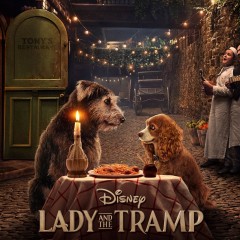 The Lady and The Tramp (2019) was written by Andrew Bujalski and Kari Granlund, directed by Charlie Bean and produced by Brigham Taylor. It follows two dogs through the streets of America in the early 20th century.