Aladdin (2019) was written by John August and directed by Guy Ritchie. It is a live-action movie, based on the original Disney animation (1992), for all ages. It follows a common thief through the streets of Agrabah and even the Palace.

Aladdin (2019) was written by John August, directed by Guy Ritchie and produced by Jonathan Eirich and Dan Lin. It is a live-action movie, based on the original Disney animation (1992), for all ages. It follows a common thief through the streets of Agrabah and tells viewers that it isn’t always what you’ve got that makes you who you are.

The story follows extraordinary events in Aladdin’s life which lead him to become a different person with the help from a magic lamp which houses a genie. This is all because of his love for Princess Jasmine of the Palace and his hatred for Jafar (the Sultan’s most trusted adviser). The film stayed true to the original by only changing a few minor things (for example, removing the song Prince Ali (reprise) and adding a new song called Speechless).

Mena Massoud plays Aladdin in the film and brings the character to life in his own interpretation of him. His childlike energy really shows Aladdin’s nature of being a thief all of his life. His articulation was always very good throughout the film, even in the fast, difficult songs, such as One Jump Ahead. His body language throughout the film really helped to show his awkwardness around Princess Jasmine and his energetic acrobatic movements throughout the street chases (which goes nicely with the actions of his stunt double).

Naomi Scott pays Princess Jasmine in the film and she shows the courage building up inside of her throughout the whole film (which is very talented) until finally, at the end she shows that she has found herself through the song Speechless. The chemistry between her and Mena Massoud (Aladdin) is dynamic, right from the moment they meet in the streets of Agrabah. Her maid, Dahlia (played by Nasim Pedrad), also helps to portray Jasmine’s character by treating her with great respect throughout the film.

The set of the film was very impressive because of its realistic scenery, making you feel like you are actually there with the characters. This portrayed the Streets of Agrabah and the Palace as one place and everyone is united. The special effects made the film complete because the animals, such as Rajah (tiger), Abu (monkey) and Lago (parrot), looked very realistic and you believed that they were actually there with the cast. The costumes and make up were true to the period which Aladdin is set in (early 9th century) and the costumes were very bright and colourful, which is true to Agrabah’s culture. The music helped to add character because the songs fit each character very well and they are mostly all from the original version.

After viewing this movie, many audience members were left mesmerised by the quality of the performance as a whole. My overall opinion of the film is that it is astonishingly good and suitable for an audience of all ages. A perfect feel good, family film. I would recommend this film to anyone. 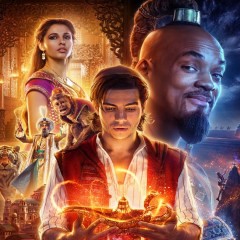 Aladdin (2019) was written by John August and directed by Guy Ritchie. It is a live-action movie, based on the original Disney animation (1992), for all ages. It follows a common thief through the streets of Agrabah and even the Palace.