My review of the Marvel Fim, Thor Ragnarok.

It all starts with Thor in a cave addressing the audience narrating about how he ended up in this position.Then he faces a fire demon called Surtur and Surtur tells Thor about Ragnarok, and how if he placed his skull on the eternal flame he would be unbeatable so Thor summons his hammer Mijonir which can only be picked up by the worthy. As the hammer was summoned it broke his chains and he leapt out, Surtur breathed fire over Thor but Thor spun his hammer round rapidly which shielded him from the fire, and after Surtur stopped breathing fire on him Thor defeats Surtur. Hauling his skull on his back Thor flew away and that is how the story started. The rest of the film was packed with action and adventure as Thor meets Hella, goddess of death and Thors sister, Hella destroys Mijonir  and pursues Thor through the Bifrost , a rainbow bridge that can go between nine realms and forces Loki (Thors brother and god of mischief) and Thor are pushed off and they go to Sakkar a planet where the unwanted are wanted but they have to fight to escape in the arena. Thor eager to escape has to fight the Hulk. The Hulk won and they have a friendship again, they steal a space ship and escape to Asguard which is  Thors home to fight Hella. Thor, Loki and other fighters from the arena defend the innocent Asguardians. Hella taunts Thor about how he lost his hammer and is powerless but Thor discovers that the hammer didn’t have the power he did, he summoned lightning on Hella stunning her for a bit, the Asguardian head on the space ship and Thor starts Ragnarok destroying Hella . Thor and the others fly onto the space ship and there is where the story ends. 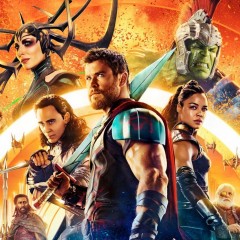 My review of the Marvel Fim, Thor Ragnarok.

My Review Of Frank Goffey's "Let's Be Frank" Exhibition.