Sally Cookson's bold adaptation of the classic novel ‘Jane Eyre’, performed on an end on stage, truly created a new, modern and more liberal perspective into the old world of gender roles and misogyny.

Cookson not only used the adaptation of this fathering feminist novel as a way of beautifully telling the original story through ensemble movement, live music, creative lighting, and set and outstanding character interpretations but also used it as a medium to introduce new ideas and perspectives on the characters, suggesting they may not be all it seemed clear they were when the book was first written, back when the societal expectations and the way women were viewed was so very different.

From the very opening of the play, it is made clear that Jane is the centre of this story, as the very first (and last) line of the play is “It’s a girl”, clearly setting up the idea that gender was something so important that it determined your entire life for you. Cookson introduces from the start what it meant to be a woman back in the times that the novel was written, starting with the harsh treatment from Jane’s Aunt Reed, through to the mistreatment of the girls at Lowood school, and the expectation that all they should learn is how to sew and play the piano.

Madeleine Worrall’s performance of Jane Eyre herself was truly outstanding. With her own slight madness, this Jane is presented as strong-willed, outspoken, and truly passionate about her own mind. Cookson’s adaptation made sure that this play stayed focused on the entirety of Jane’s life and story, rather than focusing exclusively or mainly at her romantic encounters. This is something that is different from the original novel, and truly highlights the resilience and opinions that Jane builds throughout the play. This adaptation was a very successful aspect of the play, as stripping away the sheer content of romance and interest in relationships that are included in the novel, it allows the audience to see Jane for who she is alone, without the men in her life; something that in that time would have determined who you were in society. Worrall’s Jane also recognises the forbidden sense of a woman defending herself against a man and makes it clear she wants to be seen as more than just somebody’s wife.

Jane’s relationship with Mr. Rochester, played by Felix Hayes, is presented as an emotionally freeing experience for both Jane and Rochester. And although it is clear that Rochester has a few of his own issues within his life, causing a slight madness and ‘peculiarity’ within him, Jane knows this and allows for her slight madness to show through as well, though fiercely making it clear she ‘is not an automaton’.

The use of ensemble movement I believe is what made this adaptation as powerful as it was. Not only did the cast become horses, hold window frames, and multi-roled as various characters throughout the play, they were also involved in sections of movement accompanied by the modern, adapted, folk music which created an expressionate way of showing emotions and being able to show the deaths of various characters. These dance-like sections allowed me as an audience member to connect on an emotionally deeper level than would have been possible through words alone.

The interesting, modern set that was used, rather resembled a playground that allowed the possibility of it becoming anything. The various levels perfectly allowed power inequalities to be shown but also was used well as becoming Lowood, Gateshead, and Thornfield. The simple combination of wooden planks and metal bars and ladders that made up was certainly very practical, something that in a sense reflects Jane as a character. The ladders however also allow for certain moments of madness that Jane has to be physically expressed in a successful way. When hanging off the rungs of a ladder, Jane looks in this moment, as the epitome of madness. However, one of the messages communicated through this adaptation is the fact that all people have their moments of madness, anger, and outrage, and that is it part of life.

Long white curtains were hung on all three sides of the stage, which allowed the beautiful lighting designs to fulfill the requirement of showing the location, time of day, and emotion whilst a scene was taking place.

One of the most interesting changes that Cookson made with this adaptation though, was the perception of Bertha, a perception that allows a totally regenerated look onto who Bertha really was, rather than who many people believe she was and is something that contrasts the creation of Bertha in most other productions of this production

Instead of the idea that Rochester’s wife is clinically insane (as she is shown in most other adaptations of this novel), foaming at the mouth and rightfully locked up, and encouraged to be hated by the audience, Cookson portrays her to be a powerful woman. It is only apparent some time into this play that the woman in red, played by Melanie Marshall, is actually Bertha. The deep notes she sings about passion and love, as well as her rich red gown, creates the impression that the only reason Bertha was perceived as mad was because of her inability to control her passions and anger.

Unlike in other performances, this audience is encouraged to think more deeply into Bertha as a character, and infer whether Bertha was perhaps not always mad, but was forced into madness by the control of her husband, or perhaps she isn’t mad at all. It also puts forward throughout the play that all women are slightly mad, but perhaps this is because of the suffocating society they lived in?

The choices made by Sally Cookson throughout this adaptation stripped away the confines of the old fashioned set and original perceptions of various characters. This outwardly feminist production was an utter success, allowing new ideas of the story to grow in audiences' minds, as well as helping them to consider the relevance of these outmoded gender roles in today’s society. 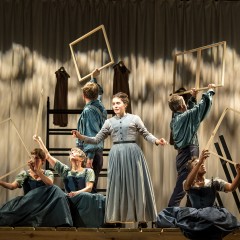 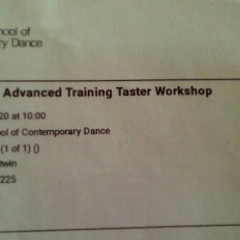