My much-belated look at Hideo Kojima’s first game since Konami: the quest for an Amazon Prime delivery-man to reunite America’s internet connection. I’m only half-joking...

I’ve been putting off making much comment on Hideo Kojima’s first release as his own entity, having split from Konami in 2015. There was immense hype for Death Stranding, with various vague teaser trailers only fueling the intrigue into the company’s first game as an independent. The initial E3 trailer featured Norman Reedus naked on a beach clutching a tiny baby, before standing up to look out over a beach filled with washed-up fish, crabs, and whales, with five mysterious floating inky figures off in the distance. So far, pretty standard Hideo Kojima. In fact, considering Kojima’s history as a horror developer, being the mind behind Silent Hills and the infamous P.T. demo (which some hold to be the most terrifying game ever), I think many expected Death Stranding to be a horror game. Certainly what nobody expected was a walking simulator.

Now the term “walking simulator” is considered something of a slur against a particular genre of video game that appears to place the story above gameplay. The major criticism stems from the fact that a game is supposed to be inherently interactive, and by sidelining the gameplay aspect of a work, a developer is failing to engage with the core element of video games which set them apart from other art forms. Ironically enough, “arty” games like Everybody’s Gone to the Rapture are usually cited as the worst offenders. But Death Stranding is a “walking simulator” of a different type. The walking here isn’t indicative of an absence of gameplay but is the gameplay itself.

The core gameplay loop of Death Stranding is delivering supplies to various shelters across the landscape. However, due to a number of environmental hazards, these deliveries must be done by hand by carrying everything on your back like a Jenga tower of takeaway pizzas and antibiotics. Adjusting your balance and steadying yourself in moving water all have to be done by the player, using controls which take advantage of our own physicality to make it feel like you are actively controlling the character’s balance. Another area of the game that also shines in terms of controls are the points where it turns into a 3rd person shooter. At this point, the controls are tight; the gunplay works just as well as some of the dedicated shooters out there that don’t spend half their time being an Amazon Prime delivery-man simulator.

The story is as bizarre as it is strangely heartwarming. The world has fallen into a post-apocalyptic state after an event called the “Death Stranding” occurred, which meant that the dead could now pass into the world of the living as “Beached Things” or “BTs” – inky humanoids invisible to people without special powers. Made of antimatter, BTs can annihilate with living people and produce a colossal explosion, and a dead person turns into a BT within 48 hours after their death if not disposed of.

This combination of factors means that to venture into the world is to risk not only your life but those of everyone within a large radius of you, leading to people staying holding up in underground bunkers and large walled cities, isolating themselves from the outside world. Environmental conditions accompanying the Death Stranding mean that human couriers are the only way of transporting goods between settlements, and that is what the player’s role in this is. You are tasked by your adoptive mother, the president of what remains of the USA, to reunite the cities using a new type of technological network.

Connection vs isolation seems to be very much the conflicting themes of the game – as professed by Kojima himself. As you travel across America reconnecting cities, you will see structures and items left by other players in their own games that will help you with yours. You are actively encouraged to put down bridges and ladders in the knowledge that those items could help another player in their own journey. Players interacting in other peoples’ games to help or hinder isn’t a new breakthrough in the medium (see Watch Dogs and Dark Souls), but it would be the first time I think that a mechanic has so inherently tied into the themes of the game.

If Death Stranding succeeds anywhere, it is in the way in which the game mechanics actively tie into the game’s themes. The above is a good example, but the walking mechanics – the balancing of risk vs reward as you consider bringing more supplies for the next city vs how much more difficult this will make your journey there over rough terrain – is also a brilliant example.

I have mentioned the brilliant music of this game briefly in my interview with Low Roar and still plan to take an in-depth look at the relationship between the music of this game and the gameplay experience. Here I will only say that the experience of passing through the beautiful and desolate fjord-inspired terrain of this game with the captivating ambience created by Low Roar, Chvrches, Ludvig Forssel, and all the many other artists who worked on this game, was a musical experience that I have never experienced with any other game. (For those who would like a taste of the soundworld of Death Stranding, I would highly recommend the album released alongside the game containing some of the music written for this game Death Stranding: Timefall).

However, to return to why I took so long to write this review, this game was divisive. I think many simply were not content with the actual gameplay, and, inevitably, it was never going to be for everyone. Planning a route across the landscape and then slowly trudging your way between cities is undoubtedly not high-octane action. That being said, I feel that this is one of those criticisms that fall under the category of a difference of taste. Perhaps I enjoyed this more than some because I’m happy to sit awash in a game’s atmosphere, whereas others want to be challenged and stimulated. Both approaches are equally valid – and one can be partial to both of course – but this is a game that very much sits in the former’s camp.

However, some of the other criticisms levelled at Death Stranding are a little more universally appreciable. There are serious pacing issues, for instance. This game can feel very padded for a game that would be considered long within its core storyline alone. Compulsory sidequesting is a significant gripe during the middle section of the game. At other points, substantial plot points and twists can occur in rapid succession, which can feel intense, only for a character to just re-explain everything that just happened as you are patted on the back and told to take some more pizzas to a nearby shelter. Talk about tonal whiplash.

In fact, overexposing is a problem almost universally shared by the characters of the game. All of the characters are beautifully acted by their motion-capped actors, and whilst some of them have genuinely ridiculous names (looking at you Die-Hardman) the excellent acting more than makes up for it. The dialogue, however, leaves much to be desired. Fragile’s catchphrase of “I’m Fragile, but I’m not that fragile!” is an example of straight-up bad writing (which could have been so much more powerful just by removing the first three words!).

Still, the biggest issue is definitely that for the majority of the game, the characters act more as a mouthpiece for Kojima to exposit to you than they do to exist as their own independent personalities. This is a cardinal sin of writing, and here you can almost hear the voice of Kojima explaining his beautifully crafted world to you, and thereby spoiling it. What makes this worse is characters will happily launch into a new exposition dump straight after an emotional scene, where we really should have been left to the silence of the open landscape to contemplate what new earth-shattering revelation or heart-rending emotional moment had just been shown to us. There is time enough for exposition at our next destination surely?

So Death Stranding is a flawed game to be sure, but one that I couldn’t help but smile at. It is a stunningly beautiful game, with an awe-inspiring soundscape, but perhaps more important than all of that, it is a game with heart. Plenty of games have you test your mettle against a slew of online opponents, but few have you uniting to achieve a common collective end like this. This is not to diminish some of the fine cooperative games out there, of which there are many (if fewer than I’d personally like). However, the setting of the game combined with the universal aim to connect with one another – surely the original objective of the internet in the first place – and the way in which the game executes this is something I find strangely irresistible. This bizarre magnetism is one of the reasons this game is so compelling to me, despite some of Kojima’s more frustrating narrative quirks or the odd piece of sloppy writing.

Combine this with a unique (if not always well-thought-out) lore taking inspiration from every corner and time-period of human civilisation – from particle physics to ancient Egyptian religion to modern spiritualism to the philosophy of social media – and what you get is a world that you want to immerse yourself in and think about.

For a more in-depth deconstruction of the game, I would highly recommend Whitelight’s video on the topic. At about 7 hours though it is more of a video-thesis than a video-essay and definitely one to be watched over several days if you have the patience! 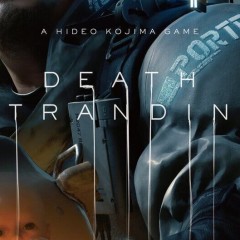 My much-belated look at Hideo Kojima’s first game since Konami: the quest for an Amazon Prime delivery-man to reunite America’s internet connection. I’m only half-joking...