What would life be like if we were living through World War 3?

You can watch Searching for Cowardice here.

Searching for Cowardice takes place in an alternate timeline, where World War 3 rages on in the present day and shows what life would be like for teens in this time.

Drawing on the Order of the White Feather – a movement in the First World War where men who refused to fight were humiliated by being given a white feather – the film does a great job of translating the jingoism of that era into a modern context and making it fit almost seamlessly. As we follow these teens we get an interesting critique of how masculinity, patriotism and violence are frequently linked in toxic ways. There’s also the added wrinkle of presenting how women can also be complicit in this romanticisation of the war and soldiers - which reflects the events which the film draws upon.

The story of this film is told through a mix of naturalism and physical theatre, with specifically orchestrated movements communicating a range of things about these characters and their experiences. This physical theatre works really effectively at some points, aestheticising the power dynamics between them and creating some powerful imagery. At other points however, it feels gimmicky and confuses what’s happening on screen, especially given how it’s generally easier to suspend your disbelief when watching theatre than film.

Searching for Cowardice is a fascinating portrayal of the way we view war and masculinity.

We also interviewed writer/director Margo Roe, and you can read that here. 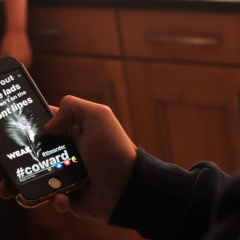 What would life be like if we were living through World War 3?