In Bloom tries to be profound but ultimately misses the mark.

You can watch In Bloom here.

In Bloom follows Lucy as she hides from two masked people who have broken into her school.

Emily Jackson is the best part of this film by miles. As Lucy, the centrepiece of the film, her panic is infectious. You immediately feel connected to her as she desperately tries and fails to get help while she hides in a pitch-black classroom. Her best moment is probably when she’s recording a video in case the worst happens, and her face and voice convey her terror in a way that’s really striking. This performance, paired with the tensions raised by the music and cinematography, is key to the aspect of the film which actually works.

Unfortunately, that success doesn’t extend to everything. When the tension is finally broken, it doesn’t feel cathartic or powerful – it's just empty. Through the use of some exceptionally aesthetically pleasing slow-mo, I can at least say that the ensuing sequences are beautifully shot. However, they all just seem to exist in a haze of trite positivity that feels unearned and cheap. All the previous intensity is deflated, and we’re left with an ending that feels like it desperately wants to be profound but doesn't actually have anything interesting to say.

In Bloom has really powerful imagery but ends up undercutting itself in a way that feels like a waste.

We interviewed the writer Luke Newell, and you can read that interview here. 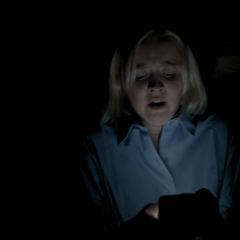 In Bloom tries to be profound but ultimately misses the mark.