It’s rare that a band so perfectly manages to capture the zeitgeist of a specific time.

It’s rare that a band so perfectly manages to capture the zeitgeist of a specific time. It’s even more rare for this zeitgeist to have been preempted months before, and even more so when considering how much of a specific and particular pickle the planet has got itself into this time (understatement of the century, yes).

The song in question is the phenomenal ‘Save Me’ by new kids on the alt-rock scene, Electric Enemy. Written as a stream-of-consciousness whilst vocalist Jim felt pessimistic and overwhelmed by the onslaught of negative news and headlines he saw, the song comes across as a cathartic tirade of emotion and rage at the state of the planet. Little did he know that an outraged and bewildered-sounding tune such as this one would become all the more appropriate in just a few short weeks.

Not only weirdly in tune with the weird way of the world in March 2020, Electric Enemy’s career is also amongst those countless musicians and artists who have been impacted by the onslaught of COVID19. They are powering on through, however, and their upcoming dates supporting the almighty Bang Bang Romeo on their tour have been rescheduled to later on this year.

Hopefully, this will be something that they can work around. After all, it could always just prove to be more inspiration for another song. 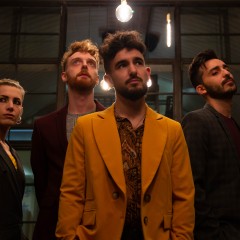 Electric Enemy manage to capture the zeitgeist of the times... Yes, even now.

It’s rare that a band so perfectly manages to capture the zeitgeist of a specific time.