A witty and insightful one-man show about the pressing topic that is knife crime.

Chicken Burger and Chips, written and performed by Corey Bovell and directed by Kwame Asiedu, is a one-man show about growing up in Lewisham, south London, as a young, black teenager, and is currently playing at the Jack Brockley Theatre in Crofton Park.

Corey has just finished college and he’s spending his summer days with the "mandem" in their favourite spot, Morley’s Chicken. Toying between the idea of going to university, or staying on the streets he loves, Corey’s decision becomes apparent when he meets Jodie: an aspiring music journalist who doesn’t have time for a guy who's into anything “dodgy”. Sadly, Corey’s decision is made for him when one incident leads to another, and his life comes to a swift end, courtesy of a cold-blooded knife attack, in the very ends he coveted. Although Corey wasn’t part of a gang, it didn’t stop the papers from making that assumption about how gang violence is blackening the regeneration of Lewisham, while leaving his true aspirations out of his obituary.

Tackling such a hard topic while being witty and full of nostalgia is not an easy line to walk, but Corey did it well. Some parts of the show were a tad messy: in the beginning, you could tell Corey was nervous as he tripped up on a few of his lines. There was also an incident during a simulated sex scene where the bed broke, “but hey, that’s IKEA for you”, as one of the audience members behind me couldn’t help but shout out.

None of that took away from the timeless, underlying focus that is the issue of knife crime. London’s knife crime rates are at a record high and have been increasing steadily for the past decade. Just because the mainstream media has diverted its attention from the subject as it’s too busy spreading fear about Covid-19, it doesn’t mean that it’s any less critical, and that’s exactly what Chicken Burger and Chips reiterates.

Those familiar with south London and the culture that surrounds it would’ve found themselves reminiscing with Corey about everything that made south iconic. The black market, Morley’s, Corey even made an ode to the different characteristics that separate people from Peckham and those from Lewisham, and the audience shared a lot of laughs because of it.

Chicken Burger and Chips speaks for the guys in the middle. The guys who don’t get into trouble, but don’t do all they can to avoid it either. Suffering a fate like Corey’s is not all about being on the wrong side of the tracks, it’s about noticing what’s bad for you before it has the chance to bring you down. Corey knew that some of his friends weren’t the most honourable, but he made sure to keep out of the trouble that, at times, followed them around. Yet, he still ended up paying for the mistakes of others, simply by association. Corey wasn’t violent; he didn’t cause trouble, nor did he come from a broken home; all common stereotypes of those associated with knife crime. Yet, his life still ended in a way most parents fear for their children.

Chicken Burger and Chips has attempted to break down the walls, and the stereotypes that society associate with knife crime in a simple but effective way. It challenges how society doesn’t or can’t separate the colour of a person’s skin from the crimes that occur. If you’re black and you’ve been stabbed, you must’ve been in a gang. Chicken Burger and Chips is a tale that young boys should take the time to acknowledge because it reminds you that you do have other options, and you shouldn’t let the allure of a particular lifestyle stop you from doing what deep down in your heart you know is right.

As Corey said, in life, some people are red, some amber and some green. Spotting the difference in people early on, letting the right people influence you and limiting your interactions with those that don’t, could be the difference between life and death.

Overall, Chicken Burger and Chips is championing the sort of the message we should never stop sharing with those who feel as if they only have one option. 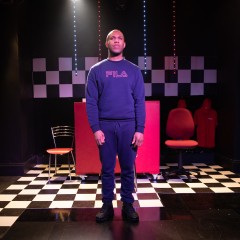 Chicken Burger and Chips: A Review

A witty and insightful one-man show about the pressing topic that is knife crime.