Last weekend I had a special birthday trip planned - a stay in Bristol, a surprise family lunch and best of all the Book of Mormon at the Bristol Hippodrome. The hype is real for this show, and on their closing weekend they did not disappoint.

The light is soft and warm, a beam of sunshine lights up the huge wooden cross at the apex of the roof, and in front of you are 10 impeccably dressed angelic looking boys. You would be forgiven for thinking I was describing some kind of choir boy performance, but whilst the songs were incredible, what happened for the next two hours couldn’t be further from fitting in a church if they tried (and believe me, they tried!)

The set was great, the costumes simple but effective, and the vocals were incredible, but of course the script was the real gem of this performance. It was so hilarious I’m not ashamed to admit I was welling up at one point, and with us being in the very front row the actors didnt help the situation by making direct eye contact and stupid faces at me through the ‘Spooky Mormon Hell Dream’. Somehow the devils aren’t quite as scary when they are cross-eyed and licking their lips at you.

However, the show did pose a real moral dilemma to me. I would like to think I’m a pretty moral, reasonable and principled person (and of course very modest), but there were so many of the jokes in this show that were so wrong, yet I couldn’t stop laughing. The humour is… risque to say the least, but I really love dark humour and despite the mild guilt I couldn’t help but laugh along. Hasa diga eebowai anyone? (NSFW, but very entertaining - https://www.youtube.com/watch?v=xLb7_UrV3-A)

The Book Of Mormon pokes fun at religion and culture without being completely offensive, as it often just points out the hypocrisies that exist within those areas but often go unacknowledged. One of my favourite songs attesting to this point was ‘Switch it off’, a song about how to switch emotions or feelings like homosexuality off ‘like a lightbulb’. In the actor’s delivery you can almost hear the thousands of repressed non-hetero religious people quietly screaming. And yet he performed it all in sparkles, a feather boa and in the most purposeful campest way possible. It was quite frankly fabulous.

There are so many hilarious scenes in it and I wish I could detail them all, but not only would it take me over my word limit but it would also spoil it for all of you! So all that is left to say is go and see The Book of Mormon. Bring your brother, your mother, your religious friends and your dog if you want. Just go! 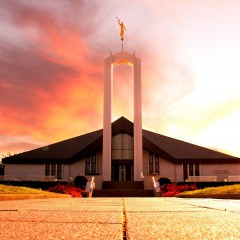 The Book of Mormon: In review

Last weekend I had a special birthday trip planned - a stay in Bristol, a surprise family lunch and best of all the Book of Mormon at the Bristol Hippodrome. The hype is real for this show, and on their closing weekend they did not disappoint.