Dublin's Autre Monde have released their debut album "The Imaginary Museum" via Strange Brew Records. The band will play a celebratory show at The Workman's Club in their hometown on April 11th.

"The Imaginary Museum" is the self-assured sounding debut album from Autre Monde, a band formed in Dublin. The record was produced by Daniel Fox of Girl Band and the band named the release after a line in Fredric Jameson’s ‘Postmodernism: The Cultural Logic of Late Captialism’ where he writes: “in a world in which stylistic innovation is no longer possible, all that is left is to imitate dead styles, to speak through the masks and with the voices of the styles in the imaginary museum”.

The band shared three tracks from the album previously: Fever In May, On The Record, and mostly recently Brain Upon Your Pillow.

The record hints to influences like Roxy Music, the Human League, and Grace Jones, which makes sense as the band set out to make a record “by a band who were playing esoteric post-punk in 1979 but who are now transplanted to 1986 where a hit is demanded”.

The band play a headline hometown show on April 11th at the legendary Workman's Club, more details on that here. Get a copy of the record on vinyl via Strange Brew or listen in full via Spotify. 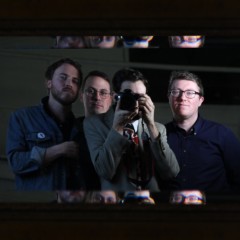 Dublin's Autre Monde have released their debut album "The Imaginary Museum" via Strange Brew Records. The band will play a celebratory show at The Workman's Club in their hometown on April 11th.