Utilising her blossoming social media platforms, the dance-pop superstar on the rise has posted a teaser from Tik Tok onto her Instagram stories, featuring her in a variety of touristic destinations in and around the city of love, Paris itself.

Allegra is keeping us guessing once again. Utilising her blossoming Instagram and Tik Tok platforms, the dance-pop superstar on the rise has posted a teaser from Tik  Tok onto her Instagram stories, featuring her in a variety of touristic destinations in and around the city of love, Paris itself.

From this video, comprised of short clips and photos, we can determine that Allegra, of ‘All About Us’ fame, is currently in Paris. But whether she is there for leisure or another top-secret work project remains to be seen. Allegra has kept things under wraps before, having only just released the behind-the-scenes scoop of her last big work trip to LA (which can be seen on her YouTube channel and is linked below).

This LA vlog is a faultless insiders’ scoop into what makes the life of a popstar. We can see Allegra shopping, recording, filming music videos, getting her hair and makeup done and, somewhere in the middle of that, catching 40 winks or so. Her first vlog, this LA diary clearly shows Allegra to be a natural in front of the camera, whether it’s performing during her music video shoots or casually chatting to her fans in her hotel room. With showbiz the environment it is in this day and age, it’s no surprise that Allegra will want to be focusing on things like vlogs and her social media presence, and her ease in front of the camera will surely stand her in good stead to take on some of the greatest names in the pop game.

Allegra’s LA trip was a fruitful one. It fuelled her last year of releases - from the upbeat ‘Body’ (Loud Luxury cover) to her now-renowned collaboration with Kurt Hugo Schneider and Sam Tsui. This footage has ensured that Allegra has had a steady stream of content on her socials for the past year, while we wait with bated breath for new original material to be released.

So, whether Allegra’s latest trip to Paris was for business or pleasure remains to be seen. But here’s hoping that we get a similar look into what this superstar on the rise was up to, to the one that we got for LA!

Watch her LA vlog right here to whet your whistle for whatever Allegra decides to put out next! 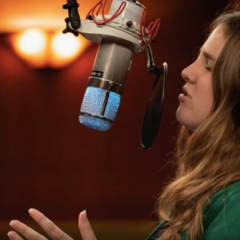 Utilising her blossoming social media platforms, the dance-pop superstar on the rise has posted a teaser from Tik Tok onto her Instagram stories, featuring her in a variety of touristic destinations in and around the city of love, Paris itself.