Of the video the Toronto-based band say, “it was shot mostly at our favourite bar in Toronto - Black Dice Cafe. It's a rockabilly bar and though Kiwi Jr is very unhip to that scene, we tried to pay it justice by wearing leather jackets. We've had probably every band meeting we've ever had at that bar, and the owner Hidecki was nice enough to let us shoot there as long as we didn't break anything (which we did during load in before we even started shooting).” It was directed by Sean Foreman who states, "we wanted the video to feel like it was based off dream logic. Things don’t make sense, the band keeps popping up, rooms are oddly connected somehow, it’s nonsense but at the same time there seems to be some undercurrent of reason guiding things."

Previous to today’s video Kiwi Jr have shared the album’s title track and “Salary Man.” Football Money will be released world-wide via Persona Non Grata Records (following debut EP by Pip Blom). The album had a Canadian release this past March on Mint Records. The album was engineered by Aaron Goldstein, and mixed by Holy Fuck's Graham Walsh.

The band have been confirmed to play SXSW in Austin, Texas in March. Before that, they'll head over to the UK for shows in Bristol, Leeds, Manchester and at London's Waiting Room on January 29th 2020.

All natives of Charlottetown, Prince Edward Island, Kiwi Jr. are now based in Toronto and much of their songwriting is informed by the city that surrounds them. They have spent the last 5 years honing their craft both in the studio and live, including opening spots with Wolf Parade, New Pornographers and Alvvays.

Football Money was recreated at high volume on stages across Canada; a dispatch stitched out of fragments, a lustrous twelve-string paint-job unraveling ten booksmart tracks in under thirty minutes. A product of two years of labor, a monument to work-life balance, the record is not unattractively scarred by its circumstance: recorded by nightfall in dormant studios, friends and enemies drafted as backup singers and engineers, the LP untidily fuses the yin of work with the yang of life, chronicling a dual-existence, unkempt instrumentalists moonlighting as undercompensated administrators by the harsh fluorescent light of day, borne back ceaselessly into the Greater Toronto Area by night.

Kiwi Jr,: Rickenbackers detuned to the frequency of a blue-screen migraine, equal parts jangle and punk - a modern day Modern Lovers with the Kinks cc’d. 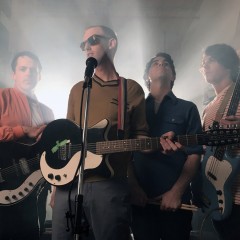