A review of the All Star Staged Concert of Les Misérables at the Gielgud Theatre.

There is something amazing about a full scale orchestra belting out the first few chords of Les Misérables which evokes a very definite emotion in the whole audience, this production continually sent goosebumps through the body of all 900 or so audience members. Whilst classed as a ‘concert’ version of Les Misérables it was far from people just standing there singing the songs in isolation. I have never seen such a well emoted performance and I think the concert setting added to this allowing you to see every detail front on.
John Owen Jones plays Jean Val Jean in this performance, a part normally played by Alfie Boe who was instead performing in Songs from the Stage at The Royal Albert Hall. While one was originally disappointed to not be seeing the main man don the main role, John Owen Jones left the audience speechless and any thought of an absent Boe was quickly scrapped. His vocals rang clear through all the songs and the emotion he portrayed was heartbreaking, I have never seen such a moving and pitch perfect performance in a musical. At the interval I overheard a few audience members saying how they thought John Owen Jones was better than Alfie Boe and I can’t really not agree with them.
Michael Ball played a commanding Javert, a role which has been embodied countless times and one that is such a stickler for the rules is often a hard one to bring a new take to. What made him really stand out was the clarity of his vocals and the emotion portrayed in ‘Stars’ and particularly his ‘Soliloquy’, the concert staging really helped to further show this as the audience could see every detail. The theatre itself had the dress circle almost entirely over the stalls and so even in the dress circle and upper circle you felt so very close to the stage you could see every detail of the actors portrayal.
Matt Lucas and Katy Secombe brought the house down every time they were on stage as the ever bickering Thénardiers, they couldn’t have possibly made more of their part. I never thought the applause was going to end after ‘Master of the House’! They added to the show with perfectly timed character building ad-libs; the Thénadiers have never been funnier! Every inch of their body was in character throughout. Fantine played by Carrie Hope Fletcher left not a dry eye in the house during ‘I Dreamed a Dream’, she had the audience in the palm of her hand and you could hear a pin drop. I think as well the intimate environment of the Gielgud theatre allowed much smaller nuances to come across but also made the actors feel like they didn’t have to belt or shout lines to be heard. The silence mixed with the louder moments when needed further added to the impact and created a much greater effect through the shade now created. Furthermore, there had been a lot of changes in the score to allow for more shades of light and dark. This was particularly well done in Javert’s Soliloquy which was made even more impactful and emotional by speaking some parts instead of singing. They also slowed sections down in it to further allow for realistic emoting which made the struggle Javert faces seem even more real. Bradley Jaden played a perfect leader of the rebellion in the form of Enjolras while Craig Mather played the conflicted Marius with great aptitude. Unfortunately, one performance was slightly below that of the others and that was due to the Eponine understudy, at times she was a bit shrieky and started to move into the unpleasant to listen to territory. However, you have to respect the fact that she was an understudy and I’m sure she was just having an off night and was trying her best under difficult circumstances.
The set for this wonderful performance created a versatile backdrop to all the songs, resembling the barricade with built in entrance ways, places for the orchestra to perform and places for the company to sit when not performing. It had a central vom entrance as well for entrances and exits and dramatic effect, added scenery was flown in which included a bridge, lanterns, and two chandeliers for the banquet scene at the end.  All of the lighting bars started down and they had a faux wood cladding on them to make them look like they were part of the prison yard at the start of the show. Praise must also be given to the lighting designers who were tasked with “creating the 02 performance inside the Gielgud”, their imaginative design helped to further engage the audience and make them forget they were watching a concert version of the show. When the students were killed on the barricade a perfectly timed small spot light lit each person up from the side in time with the gunshot making the beam of light look like the path of the bullet, this was an extremely effective idea that really enhanced the overall performance.
Overall, the whole show was spellbinding and I don’t say that about many. The main performers were faultless and the whole production was an emotional joy to watch, almost everyone was perfectly cast and the production around them was pitch perfect as well. 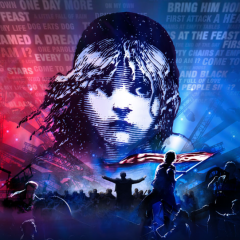 Les Misérables leaves you anything but!

A review of the All Star Staged Concert of Les Misérables at the Gielgud Theatre.