I am a big Harry Potter fan and have read all of the books and watched the films. I have been to the studios before a few years ago and wanted to visit again.

I saw an exhibition to do with the Harry Potter films, including sets and props and explanations of how they did the special effects.

I noticed that the studio had been updated since we last visited 2 years ago. There was a new entrance with paintings of letters and owls on the walls and the first thing you see once you walk into the main hall is a huge dragon hanging over your head. It was impressive because it was so big and detailed, you could see saliva dripping from the dragon’s mouth and the scales were very well painted. While you queue for the start of the tour there are quotes and pictures of the cast on the walls and some small props from the films. This stops you from getting bored while you wait.

I found the special effects the most interesting, especially learning about how they created the creatures for the films. They had to make real animals like owls, dogs and cats as well as come up with designs for lots of imaginary creatures like hippogriffs, werewolves, goblins and phoenixes. There were lots of designs on display that looked very different to the final effects in the film, so you could see the creation process and the different ideas that the team came up with. You could also see the animatronics that they used to make the creatures move, which I liked because I enjoy designing and making technical things.

I learned how much work goes into making a film, because there were thousands of people who were involved in it over 10 years. I also learned how much planning work is done before they start making the film. I saw that they first made sketches, either by drawing by hand or using a computer programme, then they made 3d models of sets and props using white card.

When I saw how the make up was done it was much more complicated than I thought. Some of the actors had to have a silicone mask that covered their whole head, which was then painted by hand and had every piece of hair attached one by one. They would spend hours each day having their make-up applied, even characters who were only in the background of scenes. They would take pictures at the end of filming to make sure that the make-up was applied exactly the same each day. This made me appreciate the effects even more because I knew how difficult they were to achieve.

I loved getting to see behind the scenes of my favourite films and finding out all the secrets of how things were made. It was very exciting to see sets and props that were actually used in the films instead of replicas. There were fun activities like riding a broomstick in front of a green screen and an interactive screen where you could control Dobby the house elf using arm movements. I also got to try Butterbeer, but I didn’t like it. 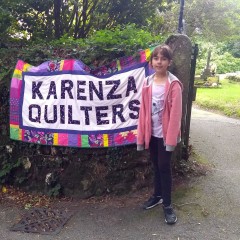