Acclaimed for her seminal 1985 novel 'The Handmaid’s Tale' (1985), Margaret Atwood has recently published a much anticipated sequel, 'The Testaments'. The novel has earned Atwood the title of joint winner of the 2019 Booker Prize for Fiction alongside Bernadine Evaristo with her novel 'Girl, Woman, Other'.

Lisa Allardice, the Guardian’s chief books writer and interviewer for the evening, welcomed Atwood on stage. She opened the spectacle with humourous political gusto in pointing out the coincidence that Britain’s failure to leave the EU on its expected departure date had fallen on the spookiest date on the calendar; Halloween of course. Atwood mockingly asked Allardice why Boris Johnson was not yet lying in a ditch. It was clear that the two women had shared more than just a witty sense of humour over the years as they reminisced over past book interviews and eating waffles together in Norwich.

Allardice is immediately relatable; an Atwood super fan. She even confessed unashamedly that her green and black frock was in homage to 'The Testaments’ bold green cover art. She asked if Atwood had the same idea, as the author’s red scarf is akin to 'The Handmaid’s Tale’s red cloak cover art. The hosts discussed the impact of 'The Handmaid’s Tale' on feminist thinking, as the subservient red cloak in the novel’s dystopian regime Gilead has become a symbol of women’s rights at rallies and protests across the world. Atwood acknowledged that there is an ongoing need for women's rights' activism, such as closing the gender pay gap, which she believes requires structural policy change.

During the interval, Allardice compiled a list of themes based on audience members’ questions using the #AskAtwood twitter campaign. On the theme of age, Atwood is playful and honest. When asked to give life advice to her younger self, Atwood simply responds, ‘You never know’. Similarly in response to whether writing becomes easier with age, the author shook her head and replied in her wonderful Canadian drawl ‘because old people get reckless’.

Yet as she reaches the age of 80 in just a few weeks, Atwood is not taken by the idea of leaving a personal legacy for her readers. Instead, the literary legend turned climate activist is considering how to preserve the Earth. Specifically, how to decompose through environmentally friendly methods. She recommends, rather morbidly, that we all consider it too.

Yet choosing not to dwell on ageing, Atwood looks to the future by donating her Booker Prize winnings to ‘Indspired’, a Canadian charity investing in the climate science education of Indigenous students. The novelist believes that those who work on the land should be given the opportunity to use their knowledge to combat the climate crisis.

Although Atwood warns of the current climate emergency, she is deeply hopeful about the future of our planet. The audience are left comforted that it is not too late for humanity to make a change. Atwood reassured us that, ‘most people are naturally kind if they have the opportunity to be so’.

In Conversation with Margaret Atwood at the Brighton Dome 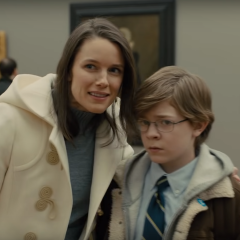 I was enthralled by Donna Tartt's 'The Goldfinch'