Voice MagReviewsFinck is a philosoph…

Jerad Finck defines himself as both a philosopher and a civil rights warrior. Nowhere is this more clear than in his latest single, ‘New Kids’.

Jerad Finck defines himself as both a philosopher and a civil rights warrior. Nowhere is this more clear than in his latest single, ‘New Kids’. The most recent release in his unique brand of analog synth-pop, Finck matches technological know-how with remarkably astute lyrics to create that rare breed of pop song - one with a message…

Political upheaval, climate crisis, peoples’ protests are all tackled here in Finck’s politically charged and anthemic track, ‘New Kids’. It’s a rousing call to arms wherein the lyrics necessarily take centre stage, but we shouldn’t forget about the track’s synth-driven backing as well. The song builds up to the chorus with handclaps and a building bass sound before exploding into an audience-screamed cry of “we are the new kids now,” a statement it’s all too easy to get swept up along with.

Following hot on the heels of previous track, ‘Home’, ‘New Kids’ catapulted Finck into stardom on its initial release, with the track selling over 50k downloads, debuting on Billboard and amassing over two million Spotify streams. Profits from a version remixed by popular UK duo Seawaves – which currently has nearly 200,000 Spotify streams – was released in support of Everytown for Gun Safety (www.everytown.org), a non-profit which advocates for gun control against gun violence. Jerad partnered with Everytown to help raise awareness for common-sense gun reform – an issue which is very important to him.

A philosopher, civil rights warrior and now a philanthropist, Finck has positioned himself as the voice of a generation - one which has the ability to speak change into being. 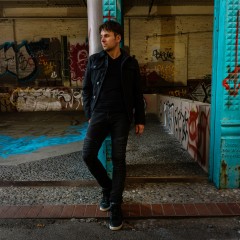 Finck is a philosopher and civil rights warrior on new track, 'New Kids'

Jerad Finck defines himself as both a philosopher and a civil rights warrior. Nowhere is this more clear than in his latest single, ‘New Kids’.