The Scare Slam brings you a fun night of spooky storytelling.

Part of the London Horror Festival, and organised by Blackshaw Theatre Company, the Scare Slam is a night of seven different performers telling scary stories (some real, some not), in various different ways. The first thing to note here is that the show is slightly misadvertised. Whilst being billed as a spoken word event/’Slam’, only one out of the night’s seven performances actually fits that description. The rest lie somewhere between dramatic readings and monologues. Initially, this was pretty jarring, but once I got past it, there was real fun to be had at Pleasance Theatre.

From the beginning, the Horror Slam embraced the fun in spookiness. Ellie Pitkin (artistic director for Blackshaw Theatre Company and our compere for the evening) kicked off the show by bringing two people out from the fog-covered audience and giving them some extremely cursed dolls from her grandma. She consistently brought the fun to the fear, even rounding off the show by reading some horrifying children's stories.

The performers gave an interesting array of scary stories, ranging from failing bistros to ghost children. For me, the standout from these was Reece Connolly, with a terrifying piece of spoken word called 'Twinkle Twinkle'. Mixing wit with rhythm and emotion, he led the audience through a deeply unsettling story. Other pieces were also very cleverly written, bringing gross hilarity (The Bistro by Andrew James Brown) and George Morris’ ‘Her’ playing with audience expectations really cleverly. There were also great performances from Nikky O’Hare and Eleanor Verner. In some cases, the storytelling felt a little lacklustre, not offering anything particularly new, but even the less innovative performances were still entertaining.

Ultimately the Horror Slam didn’t offer much in the way of slam poetry and it isn’t exactly groundbreaking, but the charm-filled storytelling made it a good night for those looking for some Halloween themed fun.

We also interviewed Ellie Pitkin, the artistic director for Blackshaw Theatre Company and have published it here. Check it out! 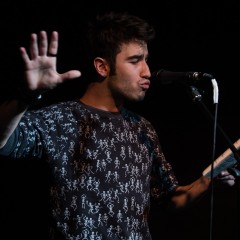 The Scare Slam brings you a fun night of spooky storytelling.