Having studied at both Cambridge and Harvard, Sasha Siem’s intellectual and exquisite songs have now turned heads in the world of fashion, namely - the Fashion Media Awards.

Having studied at both Cambridge and Harvard, Sasha Siem’s intellectual and exquisite songs have now turned heads in the world of fashion, namely - the Fashion Media Awards. The unofficial opening of New York Fashion Week, the Daily Front Row’s Fashion Media Awards honour only the most glamorous of celebrities. Kate Moss, Zendaya, British Vogue editor Edward Enninful and now Sasha Siem stand amongst the winners of this year’s prestigious awards.

Sasha received the first-ever New Wave artist of the year award and was the first musician to be asked to perform on the night. This will also mark the date of her first performance in the States. Brandusa Niro, CEO and Editor-in-Chief of the Daily Front Row, says that Siem “commands your attention” with her “poetic voice and a message that resonates with anyone who listens”. Her latest live video, posted on her YouTube channel, illustrates how that is exactly the case.

‘Flower Flower’ is a song which builds carefully around Sasha Siem’s ethereal yet commanding vocals, especially in this version, in which she plays the piano live, working and reworking the gorgeous piano part under and around her voice. The song plays with rhythm and tone in order to create a masterfully unique and delicate sound which pays homage to her years of studying and training.

Her performance at the Fashion Media Awards will be online soon, but in the meantime, here is this exquisite performance of ‘Flower Flower’ live from Sadler Wells. 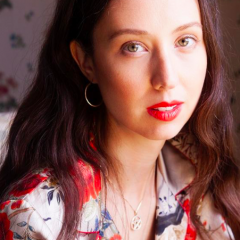 Having studied at both Cambridge and Harvard, Sasha Siem’s intellectual and exquisite songs have now turned heads in the world of fashion, namely - the Fashion Media Awards.