Joker tries to profile the Clown Prince of Crime and falls flat.

Joker follows the journey of Arthur Fleck (Joaquin Phoenix), a downtrodden and severely mentally-ill stand-up comedian whose life is about to take a dark turn.

From the very beginning, this is clearly Joaquin Phoenix’s film and he puts his all into it. His intricate physical work is incredible, with many of the movements made even more unsettling by the sheer amount of weight he lost for the role. He also perfectly captures the tumultuous nature of Fleck, rapidly shifting between different emotions. Equally, Phoenix can make a laugh convey so many different emotions at different points, which is both intense and unsettling to watch. It’s just as well that Phoenix’s performance was so strong, as no other actor really gets their time in the sun. Frances Conroy’s role as Fleck’s mother is so flat that she doesn’t get the chance to do much at all, and both Brian Tyree Henry and Zazie Beetz are criminally underused. Robert De Niro, who gives a decent performance as a television host, is the possible exception to this, but even there his presence in sparsely weaved throughout.

Where Joker completely collapses is the script, which fails on multiple levels. The first of which is that Todd Phillips and Scott Silver seem to fundamentally misunderstand how tragedy works, and are unable to make Fleck a compelling enough tragic hero for us to be affected by his downfall. The character is such a mess of harmful stereotypes about mental health and ambiguously anti-establishment anti-heroism that Phoenix’s performance is the only way that I felt anything towards the character beyond contempt. Almost every character in this film is severely underwritten, with Zazie Beetz and Frances Conroy falling into incredibly cliche roles. Towards the end of the film, some elements are added to their characters which make them marginally more interesting, but these elements still feel tacked on.

Moving from class struggle, to sexual harassment, to anarchism, this film is bursting with loaded imagery and never has anything interesting to say. Instead, there’s a veneer of intellectualism that pastes over cynicism and ambiguity. The problem isn’t necessarily what the film has to say, but rather the fact it doesn’t seem to have anything coherent to say. This can be seen in how the film haphazardly uses severe mental health issues as a plot device and repeatedly rails against both therapy and medication. Whilst fumbling such heavy topics is ‘problematic’ at any time, this is potentially dangerous in our current tense political moment, especially given how closely Fleck parallels incels. Both the camera and script compound this by refusing to ever fully condemn Fleck, clinging to the idea that he’s an anti-hero working for the (poorly defined) ‘common man’ against the (even more poorly defined) elites. It’s the ambiguity and laziness that leaves space for dangerous and violent ideologies to break through.

All of the above is wrapped in some exciting cinematography - aggressively borrowing from Scorsese throughout. Joker is undoubtedly an interesting watch, with Phoenix offering an incredible performance as the clown prince, but the muddled script and failure to provide context or commentary to the images and ideas it glorifies, results in a film that legitimately runs the risk of being heralded for all the wrong reasons. 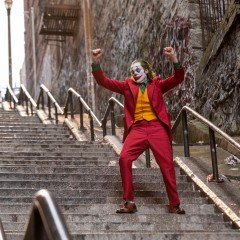 Joker tries to profile the Clown Prince of Crime and falls flat.