I am doing my bronze Arts Award and have written about a trip to London to the Globe Theatre.  We had a tour and saw a play.  By Sam Senior (posted by Mum, Naomi)

What was the title of the event?  Guided tour of Shakespeare’s Globe Theatre followed by a performance of A Midsummer Night’s Dream.

Why did you choose to attend this event?

We wanted to see a play at the same time as having a guided tour.  We wanted to experience what it was like in the original times of The Globe by seeing a play in the open air and standing up.  I like MacBeth after we read it in an English group, but there were some much younger children in our party so we wanted to see something less hard hitting.

When did you go?

We went on Friday 27th September.

Where was the event held?

This was in London at Shakespeare’s Globe Theatre near to London Bridge.

We got a tour around the theatre and we learnt that the theatre is the only building in London with a thatched roof.  It is not the original building and is 5 minutes down the river from where the original one was.  We didn’t get to go on the stage but we went up into the circle.

After lunch we saw a performance of A Midsummer Night’s Dream.  I had read the story before to prepare for it and practised some scenes from the play.

The play was directed by Sean Holmes and had lots of actors in.  They read the lines of the play each taking a character.  When the character of Puck was in the play all of the actors who were not in that scene came on wearing T-Shirts with “Puck” on playing that role to create magic and mischief.

The tour was with a guide called Richard from The Globe.  He told us that he wanted to see every Shakespeare play before he is 30.  He spent one day standing for 9 hours so he could watch three plays in a day!

I thought that the Globe was really impressive when I first saw it.  I was amazed at its vastness.

The play started with a brass band playing on the stage giving it a real carnival feel.  It was lively and got the audience going.

Did you find anything particularly interesting to your personally?

It was interesting to know that this is the only building in the whole of London with a thatched roof because of safety reasons and it took seven years to get permission when it was being rebuilt.

There was a lot of adult humour in the play which I found amusing.

What did you learn? Did it make you think about any art form differently?

Acting is a great skill that takes time to perfect.  The actors can really make a play work.  The actors had to remember their lines but also keep eye contact with the audience.  I can imagine that if the actors were not as good then the play would have been rubbish and I would have been bored.  I think that it is different for actors when the audience is standing and open air to a closed theatre with a roof.  At one part it was raining so the actors have to keep you with them.

It was good to go up to London because I don’t do that very much.  The train ride was fun.  The play was very, very funny.  The tour was interesting because the guide was nice and friendly.  We also had a little bit of time in Tate Modern.

Proof I attended the event

With my friends after the show had finished...

It was a very funny, colourful and interesting play.  The costumes of the four main characters (Hermia, Helena, Demetrius and Lysander) were very smart and in black and white.  But the characters in the fairy world were all very colourful and wacky.

The actors were excellent and it was fun because they interacted with the audience a lot.

I would recommend this play to anyone who enjoys comedy because it is guaranteed to make you laugh.  I couldn’t stop smiling.

Who did you share this review with and what did they say about your review?

My Dad didn’t get to come to the play because he had to work.  So he enjoyed hearing from me about what it was like.  It has made him want to go to see it now. 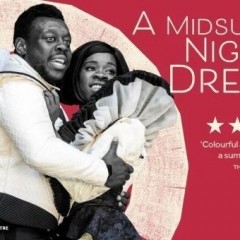 I am doing my bronze Arts Award and have written about a trip to London to the Globe Theatre.  We had a tour and saw a play.  By Sam Senior (posted by Mum, Naomi) 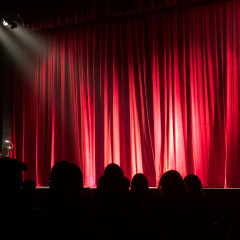