"Sister Act" by Portrush Music Society was a great night out - funny and touching.

I went to the opening performance of a musical based on the film Sister Act starring Whoopi Goldberg, performed by the local amateur musical society with Elaine Mcauley playing the lead.

My first impressions weren’t particularly good, I thought it would be the sort of musical which is all songs and no plot.  It started with a nightclub type song, with 70’s jumpsuits and no context, then after a few lines of dialogue it was straight into another song.

The funny thing is that I realised after a while that this musical is actually particularly good at weaving the songs in with the plot and the characters and this particular song is important later, so this first impression was not at all accurate.

My first reaction to the set and costumes was similar.  The main backdrop was of the interior of a church, but the first scene was a nightclub, for which they used a small screen and a table - it seemed a little confused.

Again, this impression didn’t last. I very quickly came to understand what they were going for and the simplicity of the scene changes was actually quite charming.  As it went on, and I started to understand the plot, I felt that the sets were very effective.

I really liked the three actors who played the mob-henchmen.  They seemed to be having a lot of fun with the roles and their confidence really engaged the audience.  These characters also had some of the best songs.

My favourite song in the whole musical was the one where ‘Sweaty Eddie’ sings about his dreams.  As he started to sing, he was wearing police uniform but that was removed to reveal the sequins he dreams of having the confidence to wear.  At the end of the song he comes back down to earth and the sequins come off to reveal another police uniform - he is back to his disappointing life. The choreography, backing dancers and his costume changes worked really well and were funny but at the same time touching.

This production made me completely rethink my expectations of local amateur theatre.  I had seen another production of this group which I had enjoyed but it could been better, as well as other local productions, and I wasn’t expecting too much from this.  As I watched this show it became clear that it was on a different level.  I was impressed by what they could achieve.

I liked seeing the set changes and having the band visible at the back, and even having actors amongst them at one stage.  I learned a bit about what goes on in the background of a show like this.  It made me think that I could get involved with one of their productions at some point, and that I’d be proud to be a part of it.

Overall, I enjoyed seeing Sister Act.  I was engaged with the journeys of the characters - Delores Van Cartier, the nuns (from meek to divas!) and Sweaty Eddie.  The songs are great - most are fast-paced and funny and help to carry the plot along.  The choreography worked well with the songs and created a real spectacle on the stage.

Despite how impressed I was with the big numbers and the overall production, in many ways it was the small things that really made this work.

The actor who played Vince (the mob boss) and his henchmen, made us laugh with the song “When I Find My Baby” as the love song changes to a series of fantasies of murdering his girl.  The henchmen’s synchronised stabbing dance and high-pitched singing were surprising and funny as the song went through its changes.

The relationship between the main character and the nuns was illustrated well when Delores handed the youngest nun her ‘FM boots’ as she left the safety of the church.  The scene was played well and very touching.  Seeing that young nun in those boots in the final scene gave the audience a personal connection within the big final song.

I would highly recommend this show, its entertaining and a great example of what can be done by a local music society.  Very polished and very inspiring. 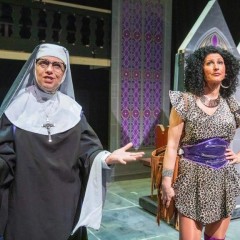 "Sister Act" by Portrush Music Society was a great night out - funny and touching.