Sister Act by the Portrush Music Society, is a great example of what can be done with enthusiasm and local talent.

I went on Friday to see members of the Portrush Music Society perform the “Sister Act”, which is a musical based on the Whoopi Goldberg Film.  Delores Van Cartier was played by Elaine Mcauley.

I had decided to attend after seeing the posters up while I was at a musical theatre summer school in the same theatre.  Because I had spent so much time there I already knew how the theatre worked, so it was quite enjoyable to see everything from an outsider’s perspective. I was interested to see that there was a screen showing the conductor at the back of the theatre for the singers. The backdrops that they used were very inventive.

The opening song didn’t really pull me in, despite the crazy 70's jumpsuits, but once that was over I started to enjoy it and found it very funny.  I enjoyed the rest of the songs too.

I was impressed by the way that the comedy was woven into the plot.  The characters were very funny, and the actors did a great job. I was particularly interested in the actor who played Vince (the mob boss), he was able to keep a stone-faced threatening character while being very funny.

I enjoyed the big numbers particularly, the choreography and singing was very professional and they made a big impact.

I’ve seen quite a few musicals, some in the West End with very high production values, and I was very impressed by this amateur show.  I could see that even with a more limited budget and less time, they were able to achieve something really polished.  It made me think differently about what is possible for normal people to achieve in their spare time.

I liked the way you could see the stage hands changing the sets and see the conductor on a screen behind the audience.  It was interesting to be able to see some of the work that goes on in the background to make a show like this happen.

I enjoyed Sister Act and I gained a lot from seeing it.  I would recommend it to anyone in the area who enjoys a great song and some laughs. 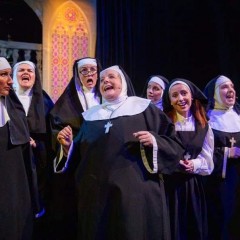 Sister Act by the Portrush Music Society, is a great example of what can be done with enthusiasm and local talent.