A gripping and visually stunning space voyage in search of humanity, purpose and closure

Taking us into the near future, Ad Astra follows Roy McBride (Brad Pitt) as he tries to find his dad (Tommy Lee Jones) in the depths of our solar system.

For almost all of the film, we’re focused on Pitt, who expertly balances the stiffness of a man whose ‘BPM has never gone above 80’, with some deeply tender moments, giving moving monologues during the cold and dispassionate AI-led ‘psychological evaluations’ spread throughout. There are many sequences where we’re just sat staring at Pitt in isolation, and yet his precise and powerful performance keeps you wholly engaged. A side effect of this tight focus on Pitt is that some other actors (most notably Ruth Negga and Kimberly Elise) feel underused. These other actors still do what they can with what they’re given, all giving reasonably good performances.

In James Gray’s script, the vast beauty of space becomes a canvas for exploring obsession, fatherhood and masculinity. Ad Astra critiques and subverts the trope of ‘Man Goes Into Space’ in varied and interesting ways, especially in the dichotomy between Roy McBride and his father. At the same time, the film still falls into some of the tropes it’s trying to overcome, especially in how Roy’s ex-wife and mother are only present/mentioned as flat characters through which the effect of the absence of Roy and his father can be (fleetingly) shown. There’s also some interesting (if cynical) ideas about how mankind would spread into space - even the Moon is divided into fiercely contested territories, with pirates roaming the spaces in-between. Whilst the script is chock full of interesting and cool ideas, not all of them land, sometimes veering on being pretentious and cliche, rather than insightful.

What really makes this film is its technical brilliance. Max Richter’s phenomenal score takes you along the emotional highs and lows of Pitt’s journey. At the same time, silence is used as powerfully as score and sound effects, capturing the feeling of vastness and isolation. Hoyte Van Hoytema’s fantastic cinematography also immerses you in Pitt’s experience, frequently switching perspective to express both grandeur and intimacy. All of this works in tandem with the stunning visual effects and beautifully precise colour and lighting to create an awe-inspiring cinematic experience.

Perfectly utilising Brad Pitt’s starpower, Ad Astra takes you to the stars for a bold, emotional and truly cinematic experience. 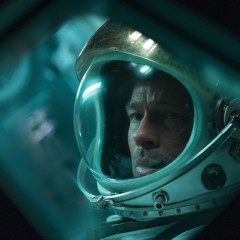 A gripping and visually stunning space voyage in search of humanity, purpose and closure