Back in 2013 I randomly chose to watch Australian comedian Rhys Nicholson, and I’m so incredibly grateful I did. At the time he delivered a great, if particularly dark set, and has only grown in popularity since. WIth Nice People, Nice Things, Nice Situations, I really feel that Nicholson has found his peak, and long may he stay there.

Now 29, in many ways Nicholson seems to have his life in order. Talking less about his eating disorders or anxiety — although the latter is still certainly there, coming out in a skittish energy — his focus is more on his ‘furbaby’, his boyfriend Kyran and the expensive nature of weddings.

That said, he isn’t below making some exceptionally graphic sexual jokes, and the audience were dying of laughter throughout. His sassy and sardonic sense of humour remains the same, with expertly delivered jokes, often centered around the deeply personal, as you’d have come to expect from him. He talks about his annual descent down the rabbit hole, the hairs growing on his back (and shoulders), and cybersex, all with hilarity and an earnestness that manages to keep the audience on side.

Floating the idea he might possibly be gay, Nicholson spoke about some homophobic feedback he got from an audience member, which actually gave him the title of his show. He also spoke briefly about the expectation of being a positive representation of the gay community, and the nonsensical burden of placing famous people from one community on such a pedestal. Even during these moments where it could quite quickly turn serious, Nicholson masterfully kept the levity in the room, and the audience in stitches.

I can only imagine the amount of work that goes into creating such a finely polished, tightly packed hour of comedy, yet I selfishly wish each show was longer. Not once did I remotely feel compelled to check the time, or roll my eyes at a particularly weak or cheap joke. Why is he still without multiple stand-up specials?

Nicholson is one of the best comedians currently working on the circuit. He is a prime example of someone who is an expert in their craft, able to take some high risk material and successfully keep the audience on side. From start to finish everyone was struggling for breath, and still Nicholson barely felt it necessary to ease up. An absolute must watch. 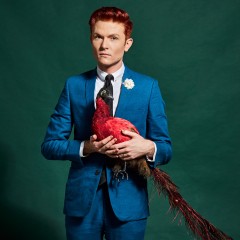