Cornwell is known as being king of the impressions. Famous for many things including starring on Spitting Image, Dead Ringers and in the brilliant band Gorillaz, there’s a degree of expectation and hype circling his Edinburgh Fringe Show. It’s completely sold out and the venue is packed, with the audience waiting excitedly as he takes to the stage.

Cornwell is considered a brilliant performer, with a long history of achievement and expertise in impressions. He’s a fantastic impressionist normally, yet somehow during this one hour show he fails to deliver.

The show itself sends mixed messages. It seems confusing, and unclear when Cornwell is in character and when he isn’t. He’s playing Robert Lemon Alackadaddy, an alcoholic who is in denial about his own addictions, whilst explaining the issues he had with his own father's influence, his problems with working life and his past upbringing that bought him to where he is today. Alackadaddy clearly has mental health issues as he keeps communicating with voices in his head and with past demons that no longer exist. He’s upfront about his own past experiences and family issues, discussing them with anybody who will listen, including the audience sat in front of him.

I would guess that the show is conveying the message that we are quick to judge from appearances and need to find out about a character by listening to their own experiences and past to understand why they are where they are. I also think it is attempting to send the message that we need to listen to actions rather than what one is saying and to read between the lines.

However in many ways it seems to reinforce the stereotypes and prejudices against those with mental health issues and alcoholism. The character embodies everything we view externally of people with these issues and the performance fails to enter the interiority of experience and feelings, but instead feels like we are just passively watching, observing and gazing upon him. The show is all about what we see when watching him, rather than what he is really feeling. The audience feels completely disconnected from both Cornwell and Alackadaddy, observing in an uncomfortable silence.

The character is rambling, going off at random tangents, switching from discussing one thing to catastrophically switching to an entirely different subject. It’s quick and sudden, the topics seemingly unlinked and unconnected. It’s just a stream of consciousness, as though you are hearing his inner monologue or his ongoing torment that slips out verbally.

The problem with this is the show becomes incoherent and the plot line, the characters and even the audience gets completely lost. It's impossible to follow what is meant to be going on within this show and the audience leaves the show confused and befuddled by what they have just watched. I was waiting for some explanation, some twist that would explain what it was we had watched, what was happening, and what this show was about, but it never came. The show abruptly ended, and where I had expected some kind of conclusion or explanation, there was nothing.

I counted 30 people who walked out of the show, mid-way through.There were so many walkouts that Cornwell himself had to address it, mentioning it within his show. At the end of the show, the two people sitting next to me on the front row turned and hugged each other, expressing relief that it was over. On leaving the venue, I heard several comments from audience members including ‘That is an hour of my life I am not going to get back’ and ‘what the hell did I just watch.’ I don’t really have an answer for them. 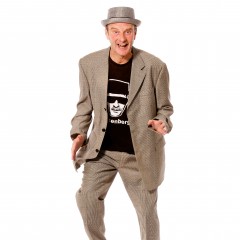