Funny, ridiculous and ultimately observant, the double-act delight audiences with their parody of holiday paradise.

Have you ever been to Butlin's? How about a children’s holiday camp? If not, well, you’re in luck! This show takes you there, acting as a parody of organised vacation fun. Except, it’s meant to be fun, but as this show clarifies it’s not fun for the workers. It’s all cheesy grins, fake smiles and maintaining an illusion of perfection as Butlin's Holiday Camp meets the Truman Show crossed with rehab.

It’s hilariously funny and observant. From the fun provided as children’s entertainment which makes adults want to tear their hair out to the scary looking mascots scarring childhood one hug at a time, to bingo that you never win, and the in house red-coated cabaret (or pink coats if you will!), Ginster's Paradise captures it all. Chris Cantrill and Amy Gledhill definitely know how to make a show, their double act complimented by surreal visuals and dazzling ridiculous displays.

The show captures a traditional British holiday from our childhoods, but rather than focus on the holiday makers it focussed on the workers themselves. It’s hilarious and accompanied by entertaining videos full of satire, it’s none-stop laughs.

Ginster's Paradise is observant and a parody of stereotypical everyday working-class life. The actors are quick-witted, on the ball and deliciously hilarious. The show features purposely-badly made videos, which take the mickey out of the well-crafted on-screen adverts that brace our television screens. They manage to capture the parts of this holiday culture which are idealised in advertisement but also the cliches from reality.

It dissects our society and uses observational humour to pick apart British holiday making culture. It is ridiculous and ramped up, yet at the same time real life weaves its way through the comedy. It uses humour to comment on conditions of workers against the expectations of holiday-goers.

You better get ready to clap along, be embraced by their huge furry mascot and to sing along to karaoke and their family entertainment! In true holiday camp style it’s full audience participation. Better yet, the mascot is played by a different actor or comedian every show, so get ready to see who the famous face is tonight!

It’s raucous entertainment, funny and packed full of well-noticed tidbits. The gags are comedic and well paced, with the audience in fits of giggles. Most of all it’s fun and lively, cheering up the audience whilst treating them to the holiday from hell. 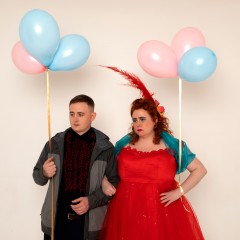 Funny, ridiculous and ultimately observant, the double-act delight audiences with their parody of holiday paradise.