Voice MagReviewsDetour: A Show About…

A show that shares that it’s ok to change your mind as many times as you want. Raw, emotional yet funny and comedic, Dinerman invites you into her life story and rollercoaster journey to where she is now, a natural stand-up comedian.

It was either destiny I saw this show or my editor booked it for me because he could see the similarities too. This show could easily be written about my life, as, despite the fact I’m definitely not a dancer, I seem to have trod a similar path. The show was extremely autobiographical and feminist, and used 1950s archive footage to contrast her experience of a dancer and a historian living in LA superficialness with authentic historic recordings.

The actor performing the show, Diana Dinerman, started out as a dancer. I started out as an artist. It was always art I was going to work in. The actor was part of a dance troupe and when it ended felt lost. She went to study history at university, followed by postgraduate study, turning to academia when she felt stuck and unable to dance. Similarly, I felt lost with art after my A Levels and decided to stop it altogether just like the actor. I went to study history undergraduate. I then went into postgraduate study in history.

After her degree, the actor realised that she couldn’t cancel out the part of her that wanted to be creative and was interested in the arts. She walked away from her PHD without finishing it. Likewise towards the end of my MA I had had enough and wanted to leave academia. I walked away too. Similarly after my history study, I couldn’t ignore the calling of art and creativity and I found myself returning to it after a 10-year study and academic forced hiatus.

Like the actor I felt lost to start with. It was very hard to get back into the arts when you’ve not been a part of it. Just like the actor I kept needing to ‘reroute’ and make a ‘detour’ into different things. The actor did this through exploring religion and faith, theology and spiritualism in remote countries abroad and solitude ritual. I started travelling in a different way, but I was also trying to figure out my life and kept rerouting taking different turns.

It took time, but she’s now back making and writing this play, performing, dancing, speaking, unable to escape the creativity and the urge to make art, or becoming a stand-up comedian. She discovers that to get somewhere you need money, you need opportunity and you need to know the right people. She gets used and abused and mistreated by those around her, but eventually finds her way. The arts is like this, everyone likes to say it’s who you know rather than what you can bring – which, when you know nobody in the arts or your field, can be pretty frightening.

The show also explores femininity and feminism. It shows how women have additional challenges in finding themselves and their career, in escaping assumptions, cliches and stereotypes. It also highlights being under-cut and undervalued in career sectors as well as everyday sexism and sexual abuse received by women - both in industry and in personal relationships.

Like the actor I eventually found my right path. Dinerman is now working as a performer, writer and actor. It took time for her to be ‘found’ as it has with me.

The knowledge of history is always relevant. The actor is able to apply it to this show, all the theory, psychology and sociology that comes with an academic degree. I also focussed on gender studies and exploration of similar theology and critical thinking. It never disappears, and it doesn’t mean it wasn’t the right thing to study, it’s just that it takes different turns and trying different things to find your path. That’s the point of this show.

It’s not a race, you don’t have to immediately get to the finish line. You can take detours along the way, to find yourself and to realise what you want.

The actor learns she doesn’t need to be with someone. She’s actually happier on her own, being single and doing what she wants, being who she wants. Her actions have been misinterpreted but in the end she’s now happy and that’s all that matters.

Its an inspiring and captivating story. Her performance and acting is commendable and I was enthralled from beginning to end. Go see this and you might learn something invaluable. 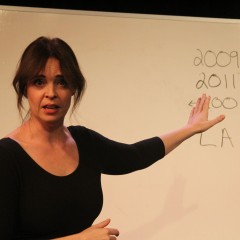 Detour: A Show About Changing Your Mind

A show that shares that it’s ok to change your mind as many times as you want. Raw, emotional yet funny and comedic, Dinerman invites you into her life story and rollercoaster journey to where she is now, a natural stand-up comedian.