A show with a message, but it gets lost in transmission

The ever thoughtful, and thought provoking, Hardeep Singh Kohli is back with another show, this time discussing philosophy, and whether it can hold the answers to the issues of today.

Along the way, Hardeep Singh Kohli talks about identity politics (“what flavour of brown are you?”), rips into organised religion (perceived as a means of keeping the working class and women in their place) and talks extensively about Starsky & Hutch.

There wasn’t a large amount of political content — just a single Trump joke (which was great) and a very by-the-books analysis of Brexit. Indeed, there were a number of points in his show which default to the standard left-wing philosophy of the world. I’m not saying that’s necessarily bad, after all, only the inhumane wouldn’t want equal rights and dignified living for the disabled and vulnerable.

He has always been one of the more philosophical, considered comedians, and that reaches new levels in It’s Hard to Be Deep. While everything he said is common sense, there wasn’t a real sense of depth to what he said. It’s nice to have these ideals reaffirmed, but there is nothing to really progress the conversation forwards. In an age where people are getting away with outright lying, and letting children starve in a cage on the border over some mistaken sense of nationalistic superiority, I don’t think it’s really enough to just reiterate ideals.

That said, Hardeep Singh Kohli talks a lot of sense, and I think correctly identifies political correctness as something that has now shackled society into never asking questions or having conversations. Being afraid of causing offence has restricted our ability to learn, and that has to change for society to right itself.

This isn’t necessarily the most ‘funny’ show Hardeep Singh Kohli has written, but it certainly is interesting. I could honestly listen to his soft cadence for hours, and the lectern placed in the middle of the stage is definitely appropriate. This is a show to watch, just don’t expect the laughs to be hard and fast. 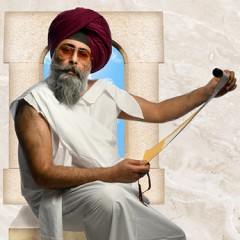 Hardeep Singh Kohli: It's Hard to Be Deep

A show with a message, but it gets lost in transmission