Not for everyone, but if it’s for you then you’re going to love it

Jack Tucker (character comedy creation of Zach Zucker, of Zach and Viggo) is trying stand-up for the first time, but is already smashing it. All the way from ‘Noo Yawk’, the over-exaggerated character over inflates his success, misinterpreting polite laughter for absolutely killing a joke; attributing the joke’s failure to a quiet microphone or that we don’t understand core concepts, like cars.

I will be upfront and say that this is a show that will only appeal to a certain type of comedy lover. I can’t think in recent years of a show that so effectively tore its audience in half; I was genuinely concerned for the person behind me who was actually snorting with laughter, while the bloke next to me seemed mere minutes from ending it all. The dichotomous nature of the comedy comes down, I think, to just how relentlessly insanely crazy, balls-to-the-wall ludicrous the whole thing was.

For context, Jack Tucker is a loser. An awful comedian, very probably riddled with STIs, going through a divorce and has a son of indeterminate age. His utter failure is where the comedy is derived. With jokes that are intentionally bad, and the wonderful physicality you would expect from an École Philippe Gaulier trained clown, Zach will drag you through an hour of the worst material you’ll likely ever hear.

Accompanying each of his awful jokes are a horrendous array of sound bites — the screech of the American Eagle, bagpipes, a guitar riff and gunshots. These are triggered by the director, who should be absolutely commended for both the impeccable timing of matching the effects to Zach’s movements, but also going rogue and triggering them arbitrarily, forcing Zach to improvise.

What appears to be random strings of consciousness and mishaps are all precisely choreographed by a genius of the trade. It took a few minutes to understand quite how the show was going to work, but once you get over that very British aversion to rambunctious personalities, you’re (possibly) going to have an amazing time.

I reckon many who go to see this will absolutely hate it. The show isn’t for you, though, and your hatred will only fuel Zach to push the character harder, ramping up the tension in the audience to almost palpable levels. It’s exhausting. It’s occasionally infuriating. It’s some people’s worst nightmare. And that nightmare is the exact schadenfreude others feed off.

This show had absolutely no right being as funny as it was. Many of you will think it isn’t funny at all. Please go and see it anyway, as for those who love this, you’ll only be enhancing the experience. 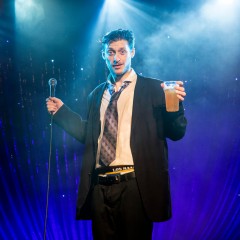 Not for everyone, but if it’s for you then you’re going to love it

Interview with Esohe Uwadiae, writer of She Is A Place Called Home