Dancing in the Moonlight, it’s caught me in its spotlight. Miles Mlambo and Chris Gates do Phil Lynott proud with this one-man production.

On a befitting long hot summer night I made my way to Brighton's Rialto to see the preview of Miles Mlambo’s debut one-man show.

Being an absolute Thin Lizzy fan girl, I was dubious at first as to how one of my beloved old school rock and rollers might be portrayed, not unlike the feeling as I settled in to watch ‘Bohemian Rhapsody’ for the first time. Of course, Rami Malek didn’t disappoint, and it’s no different here.

Miles Mlambo has done his homework. His knowledge of Lynott’s formative years is impressive, and more importantly, hugely interesting to listen to. I found myself transported back to watching storytellers in village halls, but with a considerable amount more punch.

Mlambo’s anecdotal writing lit by the backdrop of Lynott’s erratic life lends the piece a beautifully balanced tragi-comedy quality. I laughed a lot, and held back tears once too. His connection with the audience strikes a perfect balance between performer and friend, acknowledging responses with further interactions, and on-point comedy timing. His cocky, Jack-the-Lad characterisation of Lynott is endearing, particularly as we are also gifted the experience of his struggles. This complexity of character isn’t easy to convey within a 50-minute show, but Mlambo does so with apparent ease.

Chris Gates’ direction is spot on. Movement is minimal, and as a result more purposeful. He avoids the one-person show trap of including lots of on stage activity to ensure the viewers engagement; the writing moves for itself, punctuated with occasional scenes of action. I felt the whole audience hold their breath at moments of sadness due to Mlambo’s compelling rigidity and stillness, particularly in comparison to earlier scenes of frenetic physicality.

My only disappointment, being the aforementioned super fan, was the lack of Thin Lizzy tunes. However, it’s worth noting I was only party to the preview, so this may be something included in the future.

As any good storyteller does, Miles Mlambo and Chris Gates have created a show with fascinating beginning, heart-wrenching middle, and seriously cool end. Make time to see this one-man anthem at the Edinburgh Fringe before the end of the run. 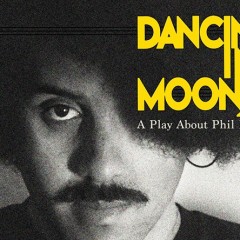 Dancing in the Moonlight: A Play About Phil Lynott

Dancing in the Moonlight, it’s caught me in its spotlight. Miles Mlambo and Chris Gates do Phil Lynott proud with this one-man production.