Circus for grown ups is an apt description. An incredibly fun show with talented performers that will make anyone’s evening.

There is twisted burlesque, a whole range of acrobatics, live operatic singing and many dance forms from popping to pop, ballroom (briefly) to contemporary. The music is sensational; a range of recent tracks with backing tracks at times, live singing and even a strip tease.

This is a very inclusive show and has something for everyone; and by this they focus on folks of any persuasion. The combination of solo, duet, triple and ensemble pieces keeps it fresh throughout. Engagement with the audience is key - heading out in to the crowd and bringing them on stage, the hour absolutely flies by and there was a big sense of it not wanting to end when it did.

If you’re there for the circus aspect, you won’t be disappointed. There’s plenty of floor acrobatics, there’s a clever dance and balance act with chairs, there’s trapeze and hung straps, there’s fire juggling, hula hoops, big hoops and even slapstick.

The show is pure artistry, it’s very playful and quite lustful too. It is very tastefully done, with a just a small amount of nudity that's presented in a comedic fashion rather than sexually. That is left to other clothed acts, who at times dabble with alternative sexual fantasies - including black leather adorned unicorns who get a rose chopped in half from their mouth with a whip. Impressive, but certainly 'suggestive'.

There is high energy throughout the show; especially with many dance pieces and the fire staff section, but it is wonderfully complemented by more relaxed and slower sections. Performers also revive earlier parts of the show - making cameo appearances with other acts, which is met with much laughter and applause, as is the fun of the show.

On occasion, a few of the changeovers could be smoother and better choreographed, but this is a minimal detraction.

So for something with opera, contemporary dance, hilarity, aerial work and whips - get on down to Rouge.

Most days at the Underbelly Circus Hub on the Meadows, 9.50pm (and a 6pm show on Mondays): https://tickets.edfringe.com/whats-on/rouge 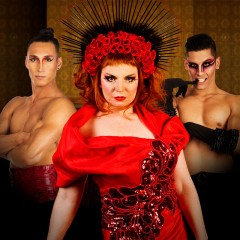 Circus for grown ups is an apt description. An incredibly fun show with talented performers that will make anyone’s evening.