This is a raw and intense production delivered with a nakedness of emotion that you rarely find outside of the fringe.

This production wasn’t quite what I was expecting. The marketing suggests a somewhat happier portrayal of friendship and love; but all is not lost. The opening is of Flora sat on stage with her laptop. The lighting changes and Nic joins her. They begin a game of truth or dare; giving some humorous starts before turning a bit darker.

There’s a pivotal answer to a truth which changes the whole setting. The energy changes and the emotions begin. The agony felt is expressed not just by faces,  but by tones of voice, by strains to speak, by the frenetic movement on stage as we dive in to the play.

There is some inventive use of a screen connected to Flora’s laptop; providing both a humorous tool and then adding incredibly to the sense of intensity and emotion. A simple device, that works remarkably well.

Lighting is used very strongly throughout; for a bare black box set, 2 actors on a small stage, the lighting is incredibly important and makes all the difference. This is complemented through the use of some great music and a single microphone which adds a whole other layer between acoustic and amplified expression - it’s used to be noticed, and enhance the play. You are drawn in to the action and taken on their story.

There is a literally bone crushing moment described with such illustrative language and delivered with such anguish that you can’t help but squirm. The audience all lean forward into the action and all appear keen to hear what’s next.

In addition to monologues there is some really good use of spoken word in the piece too, delivered with passion, commitment, and a rhythm to engage the audience.

Unfortunately somewhere around two-thirds of the way through, we got a touch lost. The illustrative narrative was perhaps too broad and a bit disconnected from the rest of the story - so much so that there was a  sense of ‘confusion that created a disengaging moment — at least for me — but thankfully it returned to the core narrative within minutes and picked back up thereafter.

The whole idea of the show seemed to be centred on the notion of good and bad, and the nuances involved in discerning it. Man and women were created, and over time the balance of power, the notion of expectations, develop. 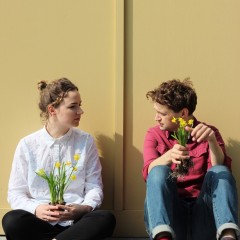 The Grand Scheme of Things

This is a raw and intense production delivered with a nakedness of emotion that you rarely find outside of the fringe.