Maria Shehata talks about her life, her parents and her 83-year-old landlady.

In Hero, Maria Shehata talks about her life as an American expat, with her 83-year old landlord and overbearing parents.

One of the clearest things with Shehata is how lovely she is. She’s got a particular warmth that you can see in her crowd work and in the way that she talks about people in her life - especially her parents. This warmth means that whilst she largely spends her set just talking about her life, it feels like you’re getting updated on a friend’s life rather than being narcissistically monologued at. Now this isn’t to say her jokes don’t get raunchy, they do, but she still manages to continually keep her extremely friendly vibes.

Her stand-up is very loose in structure, but she was interesting enough to consistently keep audience attention, never feeling aimless. One of the recurring themes she weaves through is her relationship with her parents, where she has a very funny and unique bit to demonstrate the frequency at which her dad calls. She also uses this to do some educating about Egyptian Coptic Christians (of which she is descended) and the difficulties which they face as a minority in Egypt. However, Shehata’s show predominantly strays away from politics, instead focusing on her personal life and it really works for her particular style.

Whilst Maria Shehara: Hero never swings for the fences, it’s a consistently great and personal hour of stand-up. 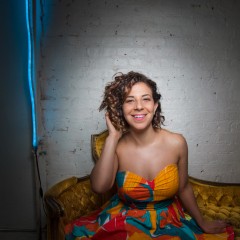 Maria Shehata talks about her life, her parents and her 83-year-old landlady.