You're drunk, bonkers, completely off your head. But I'll tell you a secret. All the best people are.

Welcome to Wonderland let the madness begin! The premise of this show is that every night, one of the actors gets completely blind drunk, but the show still goes on! I’m not talking a few pints down the pub, I’m talking a bottle of gin, vodka and a students-first-night-at-university-freshers kinda drunk. The rest of the actors continue as normal, whilst sidestepping and improvising around the hilarious antics of the drunk actor!

It makes the show brilliant, improvised and just so funny. Nobody, including the performers know what is going to happen next because nobody knows exactly what the drunk actor will decide to do! This shows ‘drunk actor’ happened to be Alice herself. There’s nothing quite like watching innocent Alice make endless sex jokes, inappropriate gestures at both the audience and on herself, then collapse on the floor in a drunken stupor mid-sentence.

During the show, she threw Dinah the cat into the audience, tried to lay on top of the piano and broke the set at the very beginning of the performance and tried to sit on an audience member, beer spilling, dress askew and barely standing. I’ve never seen Alice so undignified and she’s never been this funny.

The musical and songs were brilliant, funny and extremely entertaining. The other actors were able to react and improvise around drunken Alice to extreme comedic affect. The entire audience was in fits of laughter for the entire show, myself included.

Don’t worry though, she was topped up with beer through the show so her alcohol level never depleted, thanks to some musical-instrument-tapping audience members. She also had one cast member acting as minder and safety guard, protecting both Alice and the audience from injury or misdemeanour. Somehow this added to the fun, waiting for her to intervene and bring the show back on track to the heartache of young Alice who just wanted to have fun.

It’s such a simple premise to liven up an already glittering musical extravaganza but it’s amazingly effective. It’s relevent too, Alice in Wonderland the original novel is entirely about drug-filled hallucagenic antics so why should this production be any different. The original story doesn’t make any sense and is written by an-under-the-influence writer and likewise this show is fuelled by alcohol. Fun, frivolous and exciting, this is incredible. 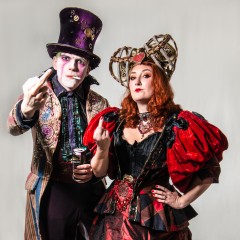 You're drunk, bonkers, completely off your head. But I'll tell you a secret. All the best people are.