Hilarious, insightful and offering an entirely different perspective on elitism.

It’s interesting because most of the other Ed Fringe shows are of the other-side's perspective. They show working class families or highlight the problems with the upper class private-schooled elite. These performances explain that all the opportunity goes to such a small percentage of people who happen to be from wealthy backgrounds, how none of the rest of us have a chance. This is problematic, it means the most talented and skilled aren’t in the best jobs and it means the people in charge, the governments and the decision makers are out of touch with reality and totally ill-equipped to do their jobs.

But here’s the thing: Houghton’s comedy takes this stance too. By relaying his entire life story and his own journey through private schooling, he comes to exactly the same outcome. He was pushed into this kind of life by his parents, unaware of the pressure and expectation being piled upon him. He felt unequipped and pigeonholed into the type of high achiever and one-percenters he was told he needed to be.

At school, they were completely out of touch with reality. They had absolutely no idea how the other half lived — that other half being the working class, the state schools, women or real-life jobs and careers. They didn’t have contact with anything outside the school.

They also didn’t realise that not everybody had the same school experiences or isolation from their parents as they had. The system is flawed, and the way our society is structured problematic. It results in one-percenter private-schooled elite who lack empathy and struggle to convey their own emotions.

Now this all sounds very serious and political but the show itself wasn’t. Houghton was hilarious, the audience were in hysterics. Comedy was woven through the entire thing, it was funny and observant. Houghton himself manages to be self-satirical whilst sharing his own story in an endearing way that makes you warm to his perspective. It provides insight into exactly why the elite act the way they do and helps audiences understand some of the method behind the madness.

Ultimately, it highlights the problem with the private schooling system, the problem with elitism in general and why we live in a completely unequal society. It highlights how opportunities are cached for the higher classes and how much that impacts everyone else life. It’s strongly political whilst being immensely personal as we delve into Houghton's own memories, autobiography and experiences. It’s witty and funny as well as challenging perceptions. Bravo. 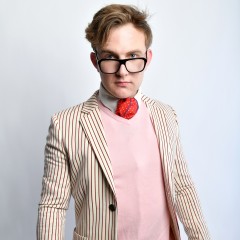 Tom Houghton: That's What I Go to School For

Hilarious, insightful and offering an entirely different perspective on elitism.