John kicks straight off with gags and immediately captured the audience.

He delivers a lot of good material centred around being a ‘millennium man’; verging on the side of awkwardness when discussing diversity and teetering to the edge of comfort at times. Much of the material is linked to anxiety, and stories of his own misgivings trying to navigate life. For context, he defines a ‘Millennium Man’ the way apparently the magazines do - ’Someone who cries at films’- so the point where men are more aware of their emotional side, in essence. This seems to apply to those currently in their mid-late 30's.

A particularly good device he employs is to ‘break out’, reading from a book of historical stories about his own shame. This contrasted really nicely with his energetic and oft passionate portrayal of stories around the stage, with the break out being under a singular spotlight and him reading in a cool and calm like manner, delivered as though what he's reading is just fact, and he's unaware of the hilarity of the situation. These moments usually end on an especially funny final punch line.

His varied pace, tones and delivery between energetic movement and times of him sitting quietly on the floor were complemented by his expressions - his whole body and voice told the stories. The audience were engaged, and his mixed use of long jokes with the shorter gags gave a good dynamic to the show; but there was something about the energy in the room that didn’t cry amazement tonight. It’s a good set; but probably best if you are, or know of a millennium man to get the most out of it.

John Robins: Hot Shame is on at 7.30pm most days in Pleasance Courtyard: https://tickets.edfringe.com/whats-on/john-robins-hot-shame 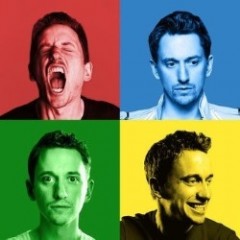 John kicks straight off with gags and immediately captured the audience.