If you’re after a bit of fun in the afternoon, then head on over to watch Bottoms Up. It's  satirical portrayal, traditionally comic, look at an opening of a new religion... However don't expect it to challenge your mind.

A way to describe this is ‘over dramatic comedy’. Think Fawlty Towers without the final polish. The concept is good, the writing is strong and the performance is challenging with the actors taking on multiple characters - and portraying them excellently.  You always knew which character an actor was playing - a sign they could do the job really well. And they came to playfully toy with this concept later in the show in a really good way.

Some of the staging didn’t quite work, with repeated prolonged backs blocking the action from some angles as they really made the most of the space - including amongst the audience.

I feel they had some very good lighting design, mostly very well executed. There is one moment where this made a massive difference and highlighted a series of comic repetitions which was superb.

So there are many good things going for this show; lighting design, the writing, props/costume usage and acting included. The direction and overall portrayal would benefit from some further dramaturgy if this is to become a farce to recommend. Nonetheless, it features some very promising actors and lays a foundation for a new show that is clearly a lot of fun for the actors to perform - and that brings the audience along with them.

Available until the 17th at theSpace on the Mile at 4.05pm: https://tickets.edfringe.com/whats-on/bottoms-up 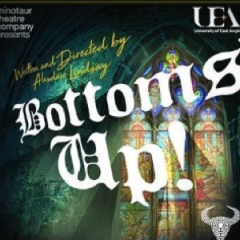 If you’re after a bit of fun in the afternoon, then head on over to watch Bottoms Up. It's  satirical portrayal, traditionally comic, look at an opening of a new religion... However don't expect it to challenge your mind.