8:8 tries to connect us to the people around us, but ultimately fails.

In 8:8, eight audience members come face to face with eight random ‘normal’ people from Edinburgh to see what we can learn.

8:8 is a very unique show. As the eight audience members, you’re taken into a small bare white room, with nothing but eight chairs on the other side. Eventually, the eight performers walk into the room and the show begins. Soon the novelty of the situation wears off, moving into a clearly deliberate discomfort that feels purposeless, but then this just ends up sliding into boredom as the 25-minute long show still somehow manages to drag. In essence, that’s the issue with all of 8:8, it has buckets of novelty, but not much actually engaging.

Even beyond how engaging the show is (or isn’t), the central thesis of the show isn’t even particularly interesting, if anything it ends up feeling trite by the end. We were given an information pack afterwards that detailed the show’s inspirations and aims, all of them seemed interesting on paper, but none of them came through on much more than a superficial level.

Ultimately, 8:8 feels like a show with lofty aspirations and a sense of self-importance that never seem to go anywhere. Though if you’ve got a spare 25 minutes it might still be worth it just to see something different. 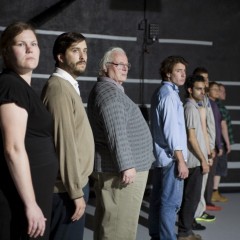 8:8 tries to connect us to the people around us, but ultimately fails.